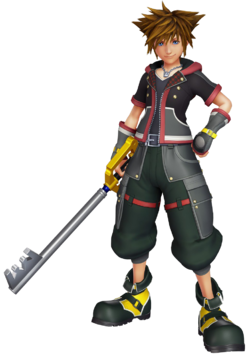 "My friends are my power!"
Sora
, Kingdom Hearts

Sora is a young boy from Destiny Islands, and the main protagonist of the Kingdom Hearts series.

An upbeat young man, Sora's journey began when his home was invaded by the Heartless. He journeyed with Donald Duck and Goofy in search of his now-missing childhood friends Kairi and Riku, and King Mickey. Since then, he has gone on many journeys to protect the Realm of Light.

Master Xehanort took his comatose apprentice Ventus to Destiny Islands after he failed to be strong enough to channel the darkness and be a suitable vessel for Xehanort. It was while they were there that Ventus's fractured heart made contact with that of the newborn Sora, through which Ventus's heart was healed.

Four years later, while searching for a now-missing Xehanort, Terra arrives on the Islands and is confronted by Riku, who suspects he is from another world. After Terra passes the Keyblade to Riku and leaves, Sora comes up to Riku and asks about the mysterious man he was just talking to. When Riku dismisses him, Sora persists, assuring Riku that he is the best secret-keeper in the world.

Shortly thereafter, Aqua arrives on the islands and meets Sora and Riku. While talking to the boys, she decides to pass the Keyblade on to Sora, but quickly senses that Terra had passed his on to Riku, and instead makes Sora promise to always look out for his friend.

Sometime later, while looking at the stars, Sora inexplicably feels sad. Riku explains that perhaps someone is in pain, and encourages Sora to reach out with his heart. When he does so, Sora's heart makes contact with Ventus's, who had just lost his and was asleep in Castle Oblivion after defeating Vanitas and destroying the χ-blade. Ventus asks if he can stay within Sora, and Sora happily accepts Ventus's heart into his own.

Sometime later, a young Kairi arrives from Radiant Garden following a meteor shower the night before. Shortly thereafter, Sora leads Riku to a hidden cave on their island, where he believes to have heard a monster. However, they only find a plain door at the end of the cave. As they leave, Sora mentions to Riku the "new girl" at the mayor's place.

Sora and Riku become fast friends with Kairi, and they spend a lot of time on the play island. Kairi's mysterious arrival on the islands prompts the trio to think a lot about the outside world. Eventually, Sora, Kairi, and Riku decide to try and get off the island.

Sora, Kairi, and Riku start building a raft to take them across the sea, hoping to discover new worlds beyond their own. On a particular day, Sora is awakened by Kairi from a bizarre dream in which he is attacked by strange, dark monsters. Urged by Riku, who notes both his and Kairi's laziness regarding the raft, Sora works to find the materials and preparations for their voyage, and challenges Riku and their other friends on the islands, Tidus, Selphie, and Wakka to fights. Riku teases Sora about his relationship and feelings for Kairi; one evening, he explains the legend of the paopu fruit and suggests he should share one with Kairi. The next day, Riku challenges Sora to a race to determine the captain of the raft, and Riku suddenly changes the wager to sharing a paopu with Kairi.

The day before setting off on the raft, while searching for provisions for the trip, Sora goes into the Secret Place and admires some of the cave drawings they had made on the rock walls. One in particular that caught his eye was one he and Kairi had made of each other, and Sora adds to the drawing, drawing himself giving a paopu to Kairi. Immediately, he's caught off-guard by a cloaked figure who mocks his ignorance. That evening, while Sora and Kairi sit on the dock looking off to the sunset, Sora remarks that he wants to see all the worlds. That night, a storm hits the islands, and Sora runs to the play island to secure the raft. On arrival, he finds that Kairi and Riku are already there, and confronts the same shadowy monsters from his dream. He searches the island for his friends, and finds Riku on the small islet. Riku tells Sora that they're about to leave their world, and he's consumed by the darkness. Sora is almost consumed as well, but a bright light dispels the darkness around him, and he finds himself holding a large key-shaped weapon with the words "Keyblade" ringing in his mind. With this new weapon, Sora searches for Kairi and finds her in the Secret Place, but the door behind her bursts open, throwing her towards him. Kairi disappears before Sora can catch her, and he's thrown out of the cave as well. When he awakens from the blast, he finds himself confronting the same Darkside Heartless from his dream. Despite soon defeating the monster with the Keyblade, Sora is swept away from his quickly deteriorating world.

Sora awakens soon after in Traverse Town, and, at the suggestion of the Accessory Shop owner Cid, searches the town for his now-missing friends. Instead, Leon confronts him and, after knocking him out, takes him to the Green Room in the Hotel. There, once Sora recovers, Leon and Yuffie explain the Heartless and their attraction to the Keyblade, and together, they search for the leader. As Sora searches in the Third District, he finds Donald Duck and Goofy. The three team up to fight a swarm of Heartless and the Guard Armor that appears immediately after. Afterwards, Donald and Goofy ask Sora to join them, and, encouraged by Leon, Sora agrees.

Sora, Donald, and Goofy set off and travel to various worlds in search of King Mickey, Kairi, and Riku. They find Riku on a return trip to Traverse Town, but he disappears from sight while Sora argues with Donald about letting Riku join them. Despite being disappointed, Sora's satisfied to know his friend is safe and okay, and is even optimistic about finding Kairi soon. Sora then continues his journey with Donald and Goofy, visiting various worlds and meeting many different people. Along the way, he increasingly finds himself at odds with Riku, who Maleficent is turning against Sora, unbeknownst to them. Finally, Riku reveals his new powers of darkness when Sora arrives in Neverland and locks him with Donald and Goofy in the hold of Captain Hook's pirate ship. Determined to rescue Kairi, who Riku has already found, Sora pushes forward, eventually arriving in Hollow Bastion. There, he confronts Riku, only for Riku to reveal himself as the true wielder of the Keyblade. Riku then takes the Keyblade away from Sora, and Donald and Goofy follow the Keyblade and Riku, leaving Sora alone. Initially distraught and confused about what just happened, Sora takes courage from the Beast's determination to search for Belle, and fights his way through the castle. When he finally catches up to Riku, Riku mocks him, but Sora persists. Riku attacks him, only for Donald and Goofy to protect Sora. Asserting his strength in his friends, Sora regains the Keyblade from Riku, and the three defeat Riku, who retreats. They keep moving forward, eventually finding and defeating Maleficent.

When the group arrives in the Grand Hall, they find a comatose Kairi on the ground. While Sora tries to wake her up, Riku, now possessed by Ansem, explains that Kairi had lost her heart and that it rests within Sora. He attempts to extract the heart from Sora with the Keyblade of heart, but Sora stops him and defeats him again. Even though he stopped Ansem, Sora realizes that in order for Kairi to wake up, her heart would need to be released from within him, and chooses to stab himself to release Kairi. Though he succeeds and Kairi reawakens, Sora loses his own heart and becomes a Heartless himself. Donald and Goofy lead Kairi out of the castle, with the Heartless Sora following. When he catches up to them in the Entrance Hall, his heart is restored to his body thanks to Kairi, who somehow recognizes him.[1] Together, the four make their way out of Hollow Bastion and back to Traverse Town.

Sora explains to Leon and the others what happened, and prepares to return to Hollow Bastion to save Riku. Before leaving, he finds Kairi in the Secret Waterway, and Kairi gives him her good luck charm, promising to always be with him wherever he goes as he promises to return the charm to her.

After Sora returns to Hollow Bastion and seals the Keyhole, he finds Leon, Yuffie, Aerith, and Cid have made it there, too. They explain that Hollow Bastion was their home, and that when Ansem is defeated, the worlds would return to their previous state, meaning Sora wouldn't be able to visit them or see them again. The now-freed princesses of heart explain to Sora that Ansem had gone ahead to another world, and the trio departs after him. They find him on the ruins of Destiny Islands, where they begin to fight him, and they soon find themselves in the endless abyss of World of Chaos, not far from the door to Kingdom Hearts. Here, they defeat Ansem, who desperately calls on Kingdom Hearts to fill him with darkness, but Sora reveals that Kingdom Hearts is light, and Ansem is destroyed.

Sora, Donald, and Goofy then race to close the door to Kingdom Hearts, and quickly find help from both Riku and King Mickey. Together, they close the door and Sora and Mickey seal it with their Keyblades. Sora then sees Kairi at a distance and runs to her, promising that he'll always be with her as she is with him, and that he'll return to her.

Soon thereafter, Sora, Donald, and Goofy begin their journey to find Riku and King Mickey. Along the way, they find Pluto with a letter signed by the King, and chase after him.

In an effort to undermine Master Xehanort's plot to recreate the Keyblade War, Sora will join Donald and Goofy to search for seven guardians of light and the "Key to Return Hearts".[2]

Initially, Square Enix wanted Mickey Mouse to be the main protagonist of the Kingdom Hearts series, while Disney wanted Donald Duck. However, Tetsuya Nomura chose to create Sora because he wanted a human protagonist. His appearance in the original Kingdom Hearts is very similar to Mickey's classic appearance, an allusion to Square Enix's original desire.

Sora's early appearance was more lion-like, having a fur, claws, and a tail, and wielding a chainsaw-like weapon with a keychain shaped like a lion's head.