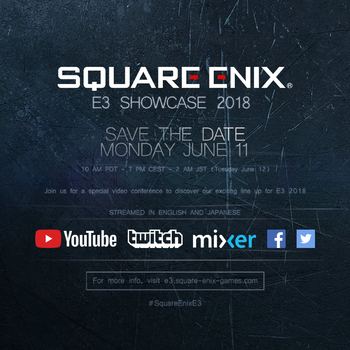 Square Enix today announced its Showcase event for this year's Electronics Entertainment Expo, or E3. The event, which will take place on June 11, 2018, will be streamed live on the Square Enix Showcase website. The Showcase website is only one day before E3 2018 officially starts, and just two days after the first performance of the Kingdom Hearts Orchestra -World Tour- performance in Los Angeles, which will be June 9.

The official website currently features a countdown to the showcase, which will be at 10AM Pacific Daylight Time.

The website is actually very undetailed about what the event is about. However, it makes clear that the stream on the website and the various streaming services (Twitch, Mixer, Facebook, Twitter, and YouTube) as the exclusive ways to watch the event. The event is also not live, apparently, with the site saying it is "produced in advance". Finally, the event will be available only in Japanese and English, and will be available to watch after the actual event.

The site doesn't divulge what games will be featured, but of course, we're expecting Kingdom Hearts III to be there. What do you hope is revealed at the event?