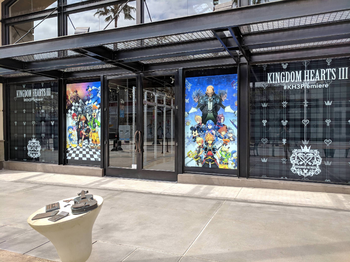 The release of the long-anticipated Kingdom Hearts III is inching closer and closer every day. To celebrate, Square Enix is holding a Kingdom Hearts III Premiere event, a special, private event where a select group of people will be allowed to be among the first to play the game. Included in the group are various members of the Kingdom Hearts community, including those who announced via Twitter over the last couple weeks that they had been chosen to attend.

The event will be held on Friday, May 18, at an event hall on the 3rd Street Promenade in Santa Monica, California[1][2], and will feature series director Tetsuya Nomura, as well as co-director Tai Yasue, who Square Enix announced via Twitter would be there[3]. Nomura announced his presence at the event through his cat Deshi during a stream Tuesday morning of Dissidia Final Fantasy[4].

Those chosen have been saying that the embargo will lift Friday morning at 6AM PDT[5][6], and we'll be here and on Twitter covering what we can using the hashtag #KH3Premiere, which is the official hashtag chosen by Square Enix. Are you excited?