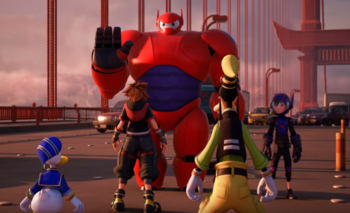 During Playstation's "Playstation Lineup Tour" during Tokyo Game Show this year, a digital spaceship, designed after the Playstation 4 controller, made it's journey through space stopping at different planets, each revealing their own game trailer upon arrival. While some Kingdom Hearts fans were up during the early hours of the morning hoping for a new trailer of their dearly beloved franchise, the space ship ported at the 2nd planet during its tour to give those fans the reason they were awake at such an unholy hour.

The trailer opens in San Fransokyo with Sora getting ready to fight heartless with his new Big Hero 6-inspired keyblade. Then we're given an introduction to Hiro and our first look at Baymax since the 2015 concept art reveal. We're quickly shown the rest of the Big Hero 6 team in some action sequences, confirming Go-Go, Wasabi, Honey Lemon, and Fred will also appear!

We're then shown the rest of the Kingdom Hearts III worlds confirmed thus far with new scenes including Randall in Monstropolis, the new Marluxia-esque nobody types in Kingdom of Corona, and Young Xehanort in Toy Box. With Don't Think Twice appropriately placed as the music, Sora fights throughout the city of San Fransokyo showing off his new Keyblade and it's transformation, dubbed "Nano Arms". Gummi ships also make a return, including the Final Fantasy-inspired ones like Moogle and Bomb.

Some more short cutscene snippets follow in tandem, including a better look at Aqua's new dark outfit, Roxas' first appearance with the Unreal Engine, and Sora picking up Master's Defender like in the 2013 teaser we saw at E3. Lots more to look forward to! Including the full trailer being revealed on September 18th, right before the Tokyo Game Show conference begins. Stay tuned for more coverage as that date draws ever nearer.