News:Kingdom Hearts III to be featured at multiple events over two weeks 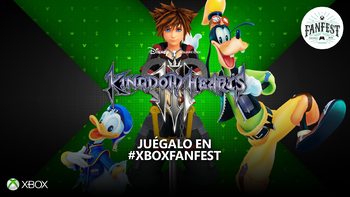 With just under three months to go until the highly-anticipated release of Kingdom Hearts III, the game is now set to be featured at five different events over a span of just over two weeks. Each of these events will feature the demo that's been paraded around the world since its private premiere in May and its public premiere at E3 in June.

First off, the demo will be featured at Paris Games Week at the Paris Expo Porte De Versailles in Paris, France. The Kingdom Hearts III demo will be featured at the event, being held from October 26 through October 30, 2018. There is some expectation for news at the event, as Square Enix has previously revealed the opening cinematic to Kingdom Hearts HD 2.8 Final Chapter Prologue at the event in 2016. However, there doesn't appear to be any plans for a panel or announcement at this year's event.

Simultaneously, the demo is also being featured at PAX Australia 2018, at the Melbourne Convention and Exhibition Centre in Melborune, Austrailia. While there appear to be plenty of stage presentations, none appear to be related to Kingdom Hearts III or Square Enix generally. Additionally, the demo will also be featured at Square Enix's booth at MCM London Comic Con 2018, held at the Exhibition Centre London (ExCeL) in London, United Kingdom. The event will also feature Andy's room, as has been the case over several events, and Sea Salt ice cream, according to a tweet from the convention's official Twitter account. Both events will run from October 26 through October 28, 2018.

On November 3, the game will be featured at Lucca Comics and Games in Lucca, Italy. In addition to the demo, the event will feature a panel for the game featuring series executive producer Shinji Hashimoto. The demo will be playable at Villa Bottini in Lucchese, according to the announcement on Lucca Comics and Games's website. The panel will be held at Auditorium San Francesco at 5:30 PM local time and will last an hour and a half, with a Q&A segment at the end. There is currently no word on a live broadcast outside the event.

Finally, the Kingdom Hearts III demo will be featured as part of Xbox's fourth annual Xbox FanFest at Foro Corona in Mexico City, running from November 9 through November 11. The event, expected to be the largest to date, according to the official announcement from Xbox, will also tie in with the return of Microsoft's X0 event, with X018 being held on November 10. X0, which hasn't been held since 2010, according to Windows Central, has traditionally been a source of "E3-level announcements", and is expected to be a big deal for Microsoft. This could mean a new trailer or information for Kingdom Hearts III; the first new trailer for the title at E3 in June was premiered at Microsoft's Xbox conference, before even Square Enix's E3 Showcase. However, only the demo has been confirmed so far.

With so many events in so little time, it appears that Square Enix and Disney are truly kicking the promotion of Kingdom Hearts III into high gear, more than any other game in franchise history. At no other time has any game in the series been promoted so much in so many places as it has this year, and definitely not as it will be over the next two weeks. This definitely makes this the best time to be following development of Kingdom Hearts III. Will you be attending any of the events.