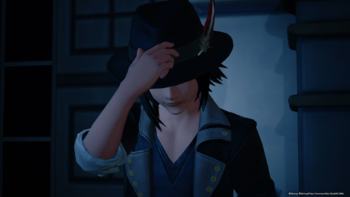 Next, the trailer features gameplay that appears to show a character running through a city before encountering the Heartless. The character then begins to fight the Heartless with the Keyblade, magic spells, and what appears to be powers from other Kingdom Hearts characters via pedestal-like objects. Various battle sequences are shown off in a grassy forest, an industrial-like area, and in Scala ad Caelum. A battle against various Heartless and a Darkside is also shown. The trailer ends showing Brain from Kingdom Hearts Union χ in Scala ad Caelum before the logo is revealed.

Check out the screenshots of the game below!

The press release describes the upcoming title as allowing "players to embark on adventures from the realm of Scala ad Caelum into the real world", suggesting a potential augmented-reality-style title akin to the popular mobile game Pokémon Go. However, no additional details on the gameplay were revealed. The title is confirmed to have a new, original story. A closed beta is set to release sometime in 2022. Will you be playing Kingdom Hearts Missing-Link? Be sure to let us know!