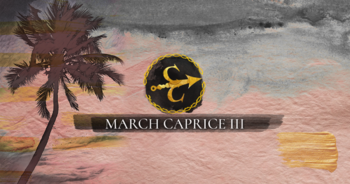 The third annual March Caprice: A Celebration of Kingdom Hearts online event has been announced this morning by the event's organizing team! The event, which is hosted entirely online and is organized entirely by fans, allows fans from all over the world to participate, highlighting their latest projects and talents. You can view the announcement teaser below!

Just as in the past, the event will be open to anyone interested in showing off all kinds of content, including video streams, speed runs, video essays, podcasts, artwork, music, and more! There will also be artwork and merchandise from the community, as well. The event will once again be livestreamed.

The following community members are organizing this year's upcoming event:

Begun in 2021 to bring the community together, March Caprice has steadily grown each passing year in both recognition and participation. This year's event will introduce a new category for cosplayers. Sign-ups to participate in next year's event are now open starting today at https://www.marchcaprice.com. More information can be found on the March Caprice website, Twitter, Discord, and other social networks.

March Caprice is set to begin on March 24, 2022. We're excited to see everyone there!