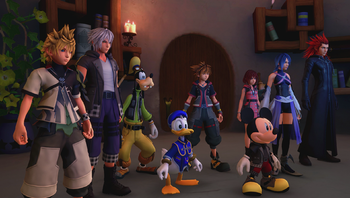 Square Enix tonight announced that all three cloud versions of the Kingdom Hearts series on the Nintendo Switch would be updated.[1] The updates bring all three titles to version 1.0.3.

The patch notes for all three titles are largely the same.[2][3][4] The server congestion status for each title is now displayed on the portal screen for each game. This is important since the games are being streamed from remote servers. As a result, if too many people are playing one of the titles at the same time, the server the titles are being streamed from may become congested, resulting in a poorer gaming experience. The server congestion status would allow one to determine whether to play now or come back later.

Kingdom Hearts III + Re Mind (DLC) Cloud Version has one additional update: players now have the option to choose to prioritize performance or graphics while playing the game.[4] In theory, this may improve the experience by allowing the player to choose to focus more on streaming a higher quality image or a less latent experience.

Let us know what you think of these updates and of the Nintendo Switch version of the games!