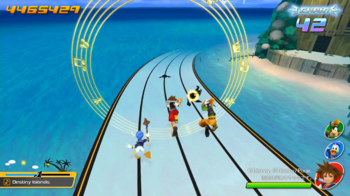 Things are moving fast for the latest and upcoming title in the Kingdom Hearts series. Today, we've found that the Entertainment Software Ratings Board in the United States and Pan European Game Information in Europe have published ratings for Kingdom Hearts Melody of Memory.

According to the official website for the game, the ESRB has rated Kingdom Hearts Melody of Memory "E10+" for Everyone ages 10 and up.[1] Additionally, PEGI has rated the title 12 for players ages 12 and up.[2]

The official assignment of a game rating suggests the game will be coming much sooner than later, as a game must be complete before these ratings organizations can analyze and award it a rating. There is still no word from Unterhaltungssoftware Selbstkontrolle (Germany) or the Computer Entertainment Rating Organization (CERO, Japan) on how they will rate the games, but presumably, it will be coming soon.

Shout out to FauxRetro for the tip!