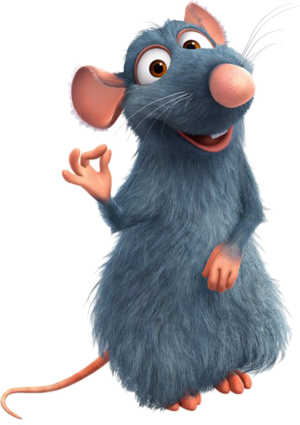 "It all started a little while ago, when I was enjoying one of the best meals of my life. And when I asked to speak to the chef, I met this wee genius. As it turns out, he wanted to expand his culinary horizons."
Scrooge McDuck, Kingdom Hearts III

Little Chef is a chef rat in Kingdom Hearts III. He originates from the 2007 Disney/Pixar animated film Ratatouille.

While foraging for food in the woods outside Twilight Town, Little Chef is surrounded and threatened by various Heartless. Just then, Sora, Donald, and Goofy appear on their way to the Old Mansion. Seeing the small rat surrounded by Heartless, Sora, Donald, and Goofy jump in to rescue him.[1] After defeating the Heartless, Sora and company begin to leave, but the rat quickly climbs to Sora's head and yanks his hair, using it to control Sora. He then makes Sora pick up his fruit, which had been scattered about when the Heartless appeared. When the trio has gathered the fruit, they ask the rat what he wants it for. He mimes his answer but Sora, Donald, and Goofy are unable to understand it, so they simply wish the rat well and continue on their way.[2]

Later returning to the Tram Common, Sora, Donald, and Goofy find Scrooge McDuck, who offers them a tart-aux-fruits. When Sora mistakes the dessert for a cake, Scrooge corrects him at the behest of an unseen source. Scrooge then reveals the source, the small rat Sora, Donald, and Goofy had rescued earlier, who Scrooge introduces as Little Chef. Scrooge explains that he met Little Chef after having one of the best meals of his life, and learned that Little Chef wanted to expand his culinary horizons. Seeing the opportunity, Scrooge financed and created Le Grand Bistrot in Twilight Town. Little Chef offers, through Scrooge, to make Sora more food if he will find him ingredients throughout his journey.[3]

Little Chef is a small rat with blue fur and dark brown eyes. His nose, ears, paws, and tail are pink, and he has two large, upper teeth. He also has four whiskers on either side of his nose. He typically walks on his hind legs. 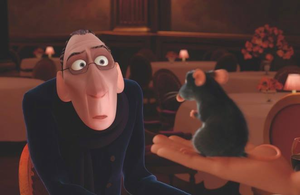 Remy is a talented rat that can cook in the 2007 Disney/Pixar animated film Ratatouille. Unsatisfied with his family's lifestyle of eating garbage, Remy yearns to become a chef. He gets his chance when he's separated from his clan and ends up in Paris, where he encounters Linguini, a garbage boy working at the famous Gusteau's restaurant. After saving a soup that Linguini nearly ruined, Remy teams up with Linguini to become cooks at the restaurant. Remy, hidden in Linguini's tote, controls Linguini by yanking on his hair, allowing Linguini to appear to be a great cook. In the process, Linguini falls in love with the restaurant's only female cook, Colette, while Remy learns that Linguini is the great Chef Gusteau's only son, a fact the restaurant's current chef, Chef Skinner, is hiding. With both of Linguini's parents already dead, the restaurant legally belongs to Linguini.

After Linguini and Remy take the restaurant from Skinner, however, the two are challenged by the cynical food critic Anton Ego. Pressured by the impending review, Linguini fights with Remy, who still has to be hidden, and Remy leaves the restaurant. Frustrated, Remy retaliates by allowing his clan, which he had found some nights prior, into the restaurant to steal food. Linguini finds them and chases them all out, and in the process, Remy is captured by Skinner, who has learned of his and Linguini's secret. Remy is rescued from the trunk of Skinner's car by his brother and dad. Remy, along with the other rats, returns to the restaurant to help Linguini, who has revealed the truth, to the disappointment and abandonment of the other cooks. Together, under Remy's directions, Linguini and the rats are able to make all the food for the night and impress Anton Ego.