This world is just too small.

This article is a stub and needs more information.

You can help by improving it and adding what you know. Please review the Manual of Style before doing so.

This article is lacking: 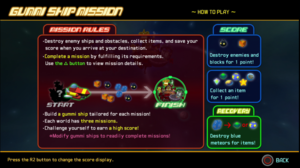 Gummi Ship Missions are a set of objectives the player can earn when travelling from world to world by Gummi Ship introduced in Kingdom Hearts Final Mix.

In Kingdom Hearts Final Mix, There are three objectives per world, and each objective yields a different gummi part. The player can go back and attempt a mission any number of times they want, but will only get each reward once.

In Kingdom Hearts II, asdlknflaksdnflaknsdf. Kingdom Hearts II Final Mix also added a new set missions called "EX-missions", which restrict the player by what types of Gummi blocks or Ships they can use.