Sora arrives at a tower in the forest.

We were all enjoying a leisurely stroll through the forest when a man came running by with Heartless hot on his heels. The man introduced himself as Flynn Rider and asked Sora, Donald, and Goofy to deal with the threat. But by the time the dust had settled, Flynn Rider was gone. We searched the environs, and discovered a hidden passage that led to a tower just like something out of a painting.

We reached the base of the tower just in time to see Flynn descending it alongside Rapunzel, a girl with long, looong hair. She had never been outside the tower before, and her one wish was to travel to the Kingdom and watch the people of Corona send up the lanterns. Concerned about all the Heartless, Sora volunteered to help Flynn escort her there safely. Sora, Donald, and Goofy run into Marluxia in the forest.

We made good progress, thanks in large part to Rapunzel's bravery, but when we scaled a hill and found a flower patch full of ferocious Nobodies, Sora urged his new friends to flee while he, Donald, and Goofy pruned the threats back.

After the battle, the Organization's Marluxia appeared with an unexpected demand: that Sora protect Rapunzel, the precious light of this world. 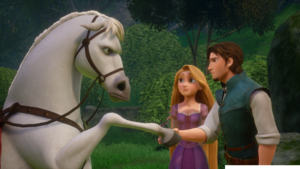 Maximus and Flynn Rider shake to a truce.

Someone else had been looking for Rapunzel, too: Mother Gothel, who lived with Rapunzel in the tower. Sora was starting to fear for Rapunzel's safety, but perhaps he was worried about the wrong person. The royal guards' most tenacious steed, Maximus, seemed to have a bone to pick with Mr. Flynn Rider.

Rapunzel's gentle words convinced Maximus to be nice (or at least relatively nice) to Flynn until we all got to the Kingdom. It sure was a relief to be back together again, where we could look after each other. Sora, Donald, and Goofy admire the floating lanterns above the Kingdom.

After a lively round of dancing in the bustling city square, we parted ways. Rapunzel and Flynn rowed out onto the lake, while the rest of us watched from the dock as the lanterns took flight.

Always there to ruin the moment, Marluxia and his Nobodies appeared and helped guide Rapunzel away from Flynn and back to Mother Gothel. Marluxia needed Rapunzel, one of the "New Seven Hearts," to stay in the tower where she would be safe—and possibly useful to the Organization. Sora grew furious at this revelation, but Marluxia used his powers to put him in a deep sleep before he could fight back.

A slobbery tongue-bath from Maximus woke Sora from his slumber, where Flynn, Donald, and Goofy were waiting. Flynn raced ahead to the tower to free Rapunzel while the rest of us dealt with a seemingly endless supply of Nobodies.

At the tower, we watched as a cape fell from the window and spawned a powerful Heartless. It was a tought fight, but we prevailed. Things nearly ended badly for Eugene—turns out that's Flynn's real name—but Rapunzel saved his life with the magic in her tears. She was the lost princess we saw in the Kingdom's mosaic, whom Mother Gothel had taken as a baby. It was also Mother Gothel who had brought Rapunzel the tiara in an attempt to drive her and Eugene apart.

Knowing Eugene and Rapunzel had found true love and would look after each other, we parted ways with them, stronger for our new friendships and ready to explore more worlds.