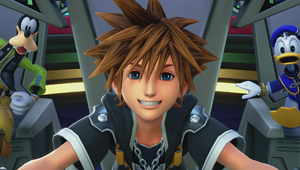 Sora, Donald, and Goofy set off on a new adventure to find the power of waking.

Freshly revived and flanked by a new Organization XIII, Master Xehanort has set his plans in motion. By staging a clash between seven guardians of light and the Organization's thirteen seekers of darkness, he intends to forge a weapon called the "χ-blade" and plunge the worlds into shadow once more. We need to find the seven guardians of light and meet his challenge. If we don't face him, Xehanort will target seven innocent hearts instead.

King Mickey's mentor, Master Yen Sid, believes the first step is to find three lost Keyblade wielders who vanished over a decade ago: Aqua, Ventus, and Terra. Any or all of them could be potential guardians of light. In the meantime, Sora needs to free Roxas's heart, which is sleeping inside his own. To do so, he'll need the power of waking.

And so it was that Master Yen Sid sent Sora, Donald, and Goofy on a new journey to try and find that power. 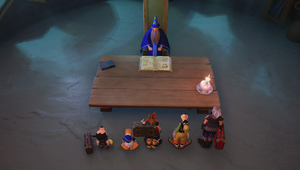 Everybody returned to Master Yen Sid's tower to share information. Sora was given some brand-new vestments to wear, and I joined the team to chronicle the adventure. (Jiminy Cricket, at your service!)

While we were away, Riku and King Mickey had been exploring the realm of darkness in search of Aqua, but they ran into a powerful swarm of Heartless. Both their Keyblades were rendered useless in the struggle, and they were forced to retreat to the tower.

Sora pointed out that we have no vessel to put Roxas's heart in and make him whole. Riku told him about the replicas created by Organization XIII. Maybe one of those would work, since they change appearance to reflect the heart that's put in them. That gave us a little home as we pressed on to the next world. Sora, Donald, and Goofy receive a call from Ienzo.

Sora knew that Organization XIII turning up in all the worlds we were visiting couldn't possibly be a good sign, but he was distracted by a call from Ienzo in Radiant Garden. Ienzo reveals the information he's uncovered from Ansem the Wise's data to Sora, Donald, and Goofy.

Ienzo and his team had deciphered some of Ansem the Wise's data, and it revealed that Sora's heart was home to not one, not two, but three other unique hearts. The first was Roxas, and the second we now suspected was Ventus. Who was the third? With yet another new mystery to solve, we continued our journey.

We reported back to Master Yen Sid, Riku, and King Mickey, and learned that the "New Seven Hearts" Organization XIII were looking for must be seven hearts of pure light who inherited the powers of the seven princesses. 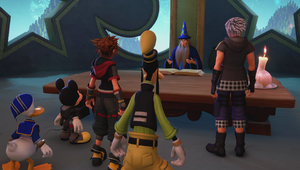 Everyone reports their findings about Organization XIII to Master Yen Sid.

Sora knew we'd have to speed things up to keep Rapunzel, Elsa, Anna, and Kairi safe. He volunteered to head to the realm of darkness to keep looking for Aqua, but Riku convinced him to focus on acquiring the power of waking instead.

At last, we had our seven guardians. Joining Sora, Riku, and the King were Axel and Kairi—fresh back from their training with Merlin—and two of the missing Keyblade wielders, Aqua and Ventus. We all renewed our vows to rescue Roxas, Naminé, and Terra, who still remained out of reach.

The seven guardians (plus Donald and Goofy, which made nine) prepared for the journey to the battleground where they would face Organization XIII. Sora and Kairi share a paopu fruit, intertwining their destinies.

With our council adjourned, Sora returned to the Destiny Islands with Riku and Kairi. Kairi shared a paopu fruit with Sora, intertwining their destinies and making sure they remain a part of each other's lives, no matter what.