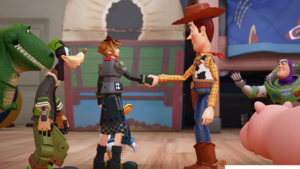 Sora, Donald, and Goofy meet Woody, Buzz, and the other toys.

After an exciting voyage on the gummi ship, we arrived in a strange new world where Sora, Donald, and Goofy all assumed the appearances of toys. The new look didn't stop them from walloping the Heartless causing trouble, though.

Woody, Buzz, and Andy's other toys saw the fight and introduced themselves. They reported that many of their friends had vanished, which was followed closely by the arrival of the Heartless and a hooded stranger in black. Immediately suspecting Organization XIII, we agreed to help the other toys search for clues at a nearby store called Galaxy Toys. 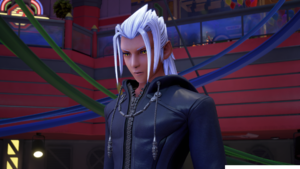 Young Xehanort explains how he's separated Woody and Buzz from the other toys.

Not long after arriving at Galaxy Toys, we had an unpleasant encounter with the Organization's Young Xehanort, who explained that he had separated Woody's group from Andy and the other toys by creating a second copy of their world.

Worse yet, Young Xehanort seemed to have the power to possess the toys at the shop, which might explain why some of Woody's friends had disappeared. 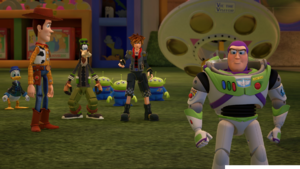 Buzz insists it's time for him and the other toys to go home.

Sora, Donald, and Goofy teamed up with Woody and Buzz to do battle with the possessed toys and rescue Rex, Hamm, and the Little Green Men. With all the toys out of danger, Sora was ready to go after Young Xehanort and stop his scheme, but Buzz insisted that they had overstayed their welcome and needed to return home and wait for Andy. 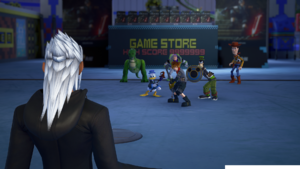 Young Xehanort prevents Woody, Buzz, and the other toys from going home.

Despite being afraid of just about everything only moments ago, Rex was excited to find a likeness of Yozora, the video game character he'd mistaken Sora for. Buzz once again tried to convince the others to head home, but it was too late. Young Xehanort appeared and decided to advance his experiment to the next stage by taking control of Buzz and pitting him against his friends. 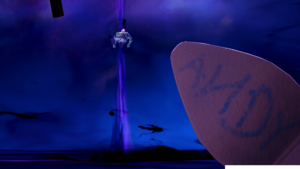 Sora managed to fight his way out of the trap Young Xehanort laied for him, and he, Woody, and the rest of us went to rescue Buzz.

Young Xehanort tried to shake us up by saying that friendship is just another reason to feel darkness and loneliness, but Woody knew different. Toy or not, even far apart, he could feel Andy's love filling his heart. Sora knew better too. There are hearts all around us, even in toys—and loneliness is just the heart's way of holding on and trying to reconnect.

We freed Buzz from Young Xehanort's control, and made a stand against the gigantic Heartless that appeared. 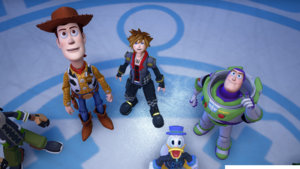 Woody, Buzz, and the other toys say farewell to Sora, Donald, and Goofy.

Despite thwarting Young Xehanort's plans, we still weren't able to put the toys' world back to normal. Sora felt bad about it, but Woody pointed out the silver lining: if the world hadn't been split, none of us would have ever met each other. Happy to have made some new friends, we departed in high spirits—to infinity and beyond.