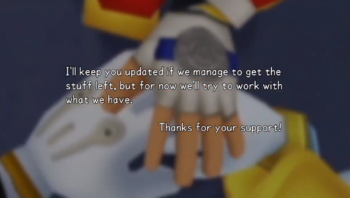 "It's a PLAY-full world!" Kingdom Hearts coded is a game most Kingdom Hearts fans haven't ever touched. The Japan-exclusive title was released only for the Docomo Prime Series-P-01A Panasonic mobile phone back in November 2008. Due to it's limited availability, it became quickly obsolete.[1][2] While a re-release titled Kingdom Hearts Re:coded made its way internationally on the Nintendo DS three years later, die-hard fans have been wanting to get their hands the original mobile-based game ever since the service ended in 2013.

Fortunately, thanks to the efforts of Kingdom Hearts researchers @ligero_miguel, @takyb_channel, and @rikunami13, that may now be possible! A few weeks ago, the trio of researchers made a request to the Japanese Kingdom Hearts community: Help them find someone with a cell phone old enough that held the game's data. The now 11 year old game was released originally across eight chapters, and to find someone with all the chapters downloaded onto their phone was difficult. However, thanks to the overwhelming reaction from the Japanese Kingdom Hearts community, every chapter was recovered. And thanks to their generosity, all the files can be downloaded here.

However, none of them are playable yet, as the executable files from the P-01A mobile phone haven't been recovered. If you know someone with access to the Docomo Prime Series-P-01A Panasonic mobile phone, please let @ligero_miguel, @takyb_channel, or @rikunami13 know, and they can finish the project for all to play! You can view the announcement trailer below.