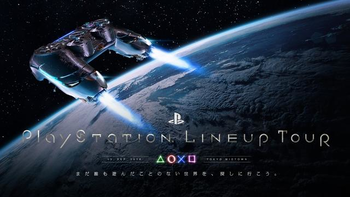 We've been given a few months to settle down after the exciting news from E3 2018 earlier this summer. Now, there's a chance things will begin to pick up again.

Sony Interactive Entertainment Japan has announced it will be holding a live video presentation titled "PlayStation LineUp Tour" on September 10, 2018. The event will be at 6:30 PM JST at Tokyo Midtown Hall in Tokyo, Japan, will be an hour long, and will be invite only via lottery of 155 PlayStation Plus and Sony Entertainment Network account holders.

The event, as described on the Japanese PlayStation Blog, will feature the latest software for PlayStation, and will be set in the vast universe of PlayStation, travelling as a member of the "DualShock 4's spaceship crew" to "visit various planets" and experience the upcoming titles.

As corny as "DualShock 4 space crew" and "various video game planets" sounds, with Tokyo Game Show just days later, we can only expect Kingdom Hearts III to be one of those exciting worlds that will be visited at the event. According to Kingdom Hearts Insider, "Gematsu reports that this is likely the same conferene as the annual Pre-Tokyo Game Show Press Conference," where we have received Kingdom Hearts news before, including "the reveal of Kingdom Hearts HD 2.8 Final Chapter Prologue."

For convenience, we've listed the times to watch the event here: