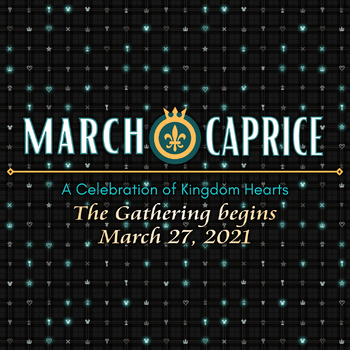 Today marks the beginning of the first ever March Caprice: A Celebration of Kingdom Hearts event, a virtual gathering of Kingdom Hearts fans in celebration of the series anniversary. Throughout the two-day event, which began early this morning and runs through tomorrow evening, creators of all kinds, from streamers to artists, YouTubers to musicians, will be showcasing a variety of Kingdom Hearts-themed projects and talents. You can check out the complete schedule here:

Artists and merchandisers are also sharing their work, featured on their own Artist Alley on the March Caprice event website. You can view the incredible art here: Artist Alley (marchcaprice.com)

The inaugural event coincides with the 19th anniversary of the Kingdom Hearts series, which launched on March 28, 2002. If you have time, be sure to check it out and support these incredible creators!