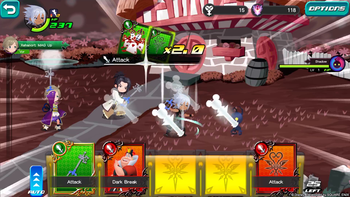 Kingdom Hearts Dark Road will soon release, and tonight, Square Enix released eight new screenshots from the game on the game's official Twitter account. The screenshots show mostly gameplay mechanics, including the new leveling system, but also includes cutscenes from the game. You can check them all out below, as well as the captions that accompany the screenshots.

You can tweet at the official Twitter account @kh_dr_na using the hashtag #KHDRScreenshotPreview between now and June 30 to get a random screenshot from the above tweeted to you. Unlike last time, there's no date for the next update, though it's expected to be soon.