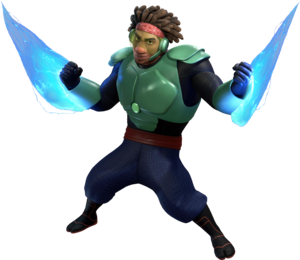 Wasabi No-Ginger is a member of the superhero team Big Hero 6 in San Fransokyo in Kingdom Hearts III. He is from the 2014 Disney film Big Hero 6.

Wasabi is a student at the San Fransokyo Institute of Technology in the 2014 computer-animated Disney film Big Hero 6.

His last name comes from the Marvel comic book series, but is not used in the film.