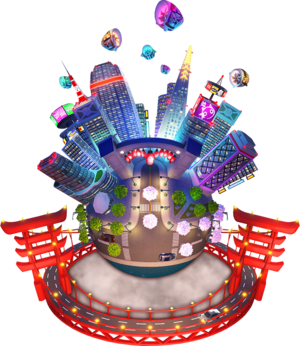 San Fransokyo is a world that appears in Kingdom Hearts III. It is based on the 2014 Disney computer-animated film Big Hero 6.

Sora, Donald, and Goofy arrive to in the large city of San Fransokyo to find it under attack from the Heartless. They soon meet Hiro and Baymax, who are attending to a young woman named Go Go, who had been thrown by the Heartless. Sora offers to help take down the enemies, after which they regroup in Hiro's Garage. There, Hiro introduces Sora and the gang to the crime-fighting team Big Hero 6, comprised of Hiro, Baymax, Go Go, Honey Lemon, Wasabi, and Fred, while Sora introduces himself and Donald and Goofy as "Keyblade Hero 3". The Big Hero 6 team is disappointed that they were largely defeated by the Heartless, and Hiro decides to use Sora to train and improve the team. Using an AR headset, Hiro has Sora go through a virtual track throughout the city in order to collect data on his abilities. The data inspires the team to make improvements to their powers in order to better face the Heartless.

The following day, as reports begin to appear that the Heartless are attacking the city again, Big Hero 6, joined by Sora and company, make their way into the city to confront the Heartless. After defeating several waves of Heartless above the city, they face the giant Catastrochorus, which they soon also defeat. Following the fight, they spend the evening atop the bridge. Hiro explains that sometime before, his brother Tadashi, who invented Baymax, had perished in a fire, but that he lives on within Baymax and within all of them. Sora then remembers Roxas, and for a brief moment, sees Hayner, Pence, and Olette in place of Baymax, Go Go, and Hiro. As they make their way home, they suddenly see a mysterious dark blur fly through the city. Go Go, Honey Lemon, Wasabi, and Fred run ahead to investigate, while Hiro decides to go home and analyze the enemy. Sora, Baymax, Donald, and Goofy decide to look for and help the other members of Big Hero 6. They find each of them trapped by what Fred dubs "Darkubes", and are able to successfully free them. The Darkubes then gather high above the city, and the team quickly make their way up to face them. Once there, however, a man in a dark hood approaches them. Sora is shocked, as he recognizes Riku's voice. The hooded man reveals himself to be a past version of Riku, from when Ansem, Seeker of Darkness had control of him. He explains that the Real Organization XIII is attempting to create replicas from data, and reveals a red chip in his hand, which Hiro recognizes. Riku throws it into the Darkubes, which then attack, but Sora, Donald, Goofy, and Baymax are able to defeat the mysterious threat, Hiro having identified a weakness in a core that occasionally exposes itself.

The group returns to Hiro's Garage, and Hiro explains that the chip is the first fighting commands that he had programmed for the original Baymax, but that the chip, along with Baymax and Hiro's microbots, were lost in another dimension. Hiro then explains that he wants to find the other Baymax, and hopes to retrieve the chip from Riku. Meanwhile, somewhere in the city, Dark Riku appears to Maleficent and Pete, and warns Maleficent about being consumed by the darkness again. When Riku disappears, Pete asks if Maleficent knows him. She confirms knowing him, but explains she couldn't tell from when he is from.

When the Darkubes are reportedly seen again the next day, Sora, Hiro, and the others make their way to face the blocks, only for Riku to appear. He explains that the chip, which Sora had already claimed to be Baymax's heart, would serve as a heart made from data the Darkubes had gathered from attacking the city. He then reveals the vessel that will contain the heart, the original Baymax, now corrupted by darkness. Riku finally taunts Sora by saying that he will perfect the heart by destroying the original Baymax, which Hiro has an emotional attachment to.

As the now-Dark Baymax begins to attack the city, Sora turns to Hiro and asks what to do. Hiro decides that it would be better to take down Dark Baymax than to try and save it. Sora and Baymax together fly after the Dark Baymax and defeat it, bringing it down. After doing so, Hiro retrieves the chip from Dark Baymax. Although emotional for doing so to his friend, Hiro decides to destroy his heart, and proceeds to break the chip.

Sometime later, Hiro is able to reprogram the original Baymax, allowing him to once again be a healthcare companion.

The world was first announced during D23 Expo 2015. At the time, it was revealed that the story would take place after the events of the film. Concept art revealed at the time featured Sora riding Baymax, confronting a darker version of the latter. Actual gameplay and in-game scenes were not shown until a week before Tokyo Game Show 2018[1][2]