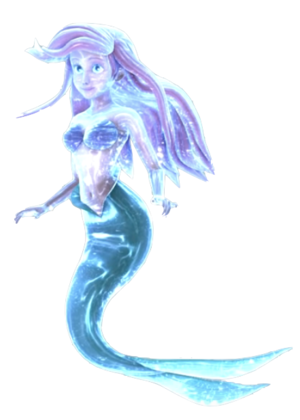 "So many places I want to see... I know I’ll get there someday. I’ll find a way somehow. I’m sure of it."
Ariel, Kingdom Hearts

Ariel is a princess in the kingdom of Atlantica and the daughter of King Triton. She originates from the 1989 Disney animated film The Little Mermaid.

Ariel is running away from the Heartless along with her friends, Flounder and Sebastian, when she first meets Sora, Donald, and Goofy. Ariel takes Sora at his word when he says they're from another ocean, and she, Sebastian, and Flounder teach Sora to swim. When the Heartless return, Sora, Donald, and Goofy guide Ariel and her friends back to her home in the palace. There, her father, King Triton, reiterates his command for her not to leave the palace.

Ariel, however, leaves the palace to help Sora, Donald, and Goofy find the keyhole. They find a crystal resembling her father's trident near a sunken ship, which begins to reveal the keyhole in Ariel's grotto. Before it's revealed, however, King Triton appears and destroys the crystal. Crying, Ariel leaves the grotto alone.

She's then found by Ursula, who tricks her into stealing Triton's trident for her, promising to help Ariel journey to other worlds. Ursula inevitably breaks her promise and escapes from the palace, injuring Triton before fleeing. Wanting to make up for her mistakes, Ariel joins Sora, Donald, and Goofy in defeating Ursula.

After Ursula is defeated, Triton gives Ariel his trident to reveal the keyhole in her grotto. After Sora seals the Keyhole, he apologizes to Ariel for lying about their origin, but Ariel explains that she will find a way to travel to other worlds some day.

As a figment crafted from Sora's memories, Ariel appears with the rest of Atlantica in a floor in Castle Oblivion.

One year after meeting Sora, Ariel rescues a young Prince Eric from drowning and sings to him until he awakens, fleeing underwater before he can get up. Her fascination with the human world only increases from there, despite her father and Sebastian's efforts to distract her with an upcoming musical. To cheer her up, Flounder, with the help of Sora, Donald, and Goofy, gave her a statue of Prince Eric. Her infatuation for Eric grows, but when her father learns of the statue, he destroys it, and Ariel flees, distraught.

Ursula appears again, and makes a binding deal with Ariel to make her human for three days in exchange for her voice, with the promise she'll stay human if Eric kisses her before sunset on the third day. With the help of Sora, Donald, Goofy, and Flounder, she makes it to the shore, where she's found by Eric, who takes her in.

Ariel and Eric spend much of the next three days together, with Sora, Donald, Goofy, Flounder, and Sebastian covering for her. On the third day, they find Ariel crying because Eric had left her for another woman. Sora and the others quickly realize it's Ursula, and Sora destroys the seashell containing Ariel's voice, which Ursula's using to hypnotize Eric. Ariel regains her voice, but is dragged back into the ocean as the sun is setting. To spare her from Ursula, however, King Triton makes a deal with the sea witch to release Ariel in exchange for himself, and Ursula once again takes Triton's trident as a result. Along with Sora, Donald, Goofy, and Prince Eric, Ariel fights and defeats the sea witch.

Ariel then reveals to Eric that she is a mermaid, but his feelings for her do not change. Seeing that they're both in love, King Triton allows for her daughter to be with the human prince. Ariel later joins Sora, Donald, and Goofy in the musical, and although is sad to see them go, is glad when they promise they'll see her again.

Ariel joins Sora through different worlds as a link through the Ocean Heartbinder, which Sora acquires in The Caribbean.

Ariel first appears in Disney's 1989 animated film The Little Mermaid, where, as the youngest of King Triton's seven daughters, she's constantly dreaming of the world beyond the sea. Her desire grows when she rescues a young man, Prince Eric, from drowning, and she falls in love with him. The opportunity to join him arrives when she encounters Ursula, who makes her a deal to make her human for three days in exchange for her voice, with the condition of staying a human forever if Eric kisses her before the end of the third day. Although Ursula uses Ariel to get to King Triton and his trident, Ariel and Eric are able to defeat the sea witch, and King Triton grants her her wish of being human and remaining with Eric.