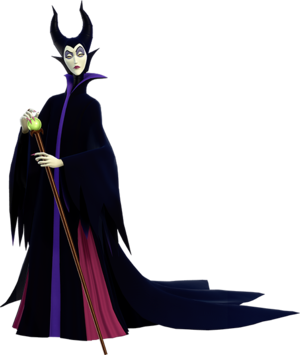 Maleficent is an evil fairy and major antagonist in the Kingdom Hearts series. Inspired by Master Xehanort, she seeks to rule all worlds by seeking the power in Kingdom Hearts.

She originates from the 1959 Disney animated film Sleeping Beauty.

After meeting again and then banishing away Sora, Donald, and Goofy, Hades is standing alone on an Olympus mountain when a dark corridor opens behind him and Maleficent and Pete step through. The conversation between the once upon a time allies is not pleasant, but Hades is intrigued when Maleficent reveals she is looking for a black box. Hades asks her if she is thinking of the box he knows Zeus has buried on earth, which brings a small smile to Maleficent's face.[1]

After rescuing an Olympus citizen from the attack on Thebes, Sora, Donald, and Goofy are surprised as a dark corridor opens behind them and Maleficent and Pete step through. Maleficent sneers at the presence of "the King's pawns", but is quick to deny involvement when Sora accuses her of summoning the Heartless. Pete seems to notice a difference in Sora, and is glad to point out that Sora seems weaker than before and possibly easy to defeat. Maleficent, however, dismisses this, citing a more pressing matter to attend. Pete lets slip that this is their search for a black box, a reveal that greatly irritates Maleficent. With one final pointed comment each about the trio's unimportance, Maleficent and Pete head back through the dark corridor, with Sora failing to stop them from getting away.[2]

Following the lead from Hades, Maleficent and Pete dig up the ground in Thebes' Gardens in search of a black box. Pete questions whether the box--which supposedly contains the Book of Prophecies--really exists, but Maleficent is certain of her need for the book and explains that the existence of the box--evidently told to her by someone in black--is the only clue she has and must be investigated. Pete doubles down on his doubt, but the conversation is dropped when he finds something in the ground: the Pandora's Box Hades told them about. Upon inspection, Maleficent tells Pete to leave it behind, knowing it is not the box they need. Disappointed, the pair leave Olympus. Xigbar is revealed to be standing on a rooftop some distance away, having been watching the pair the whole time.[3]