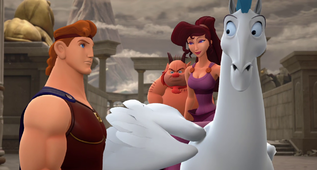 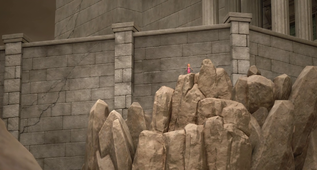 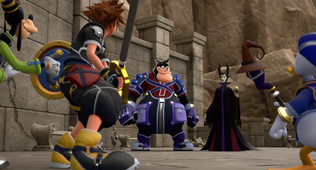 "Maleficent's Desire" is a cutscene in Kingdom Hearts III. It involves the return of Megara and Philoctetes and a confrontation with Maleficent and Pete.

After defeating the Heartless attacking Thebes, Sora, Donald, Goofy, and Hercules are visited by Megara and Philoctetes, who arrive riding atop Pegasus. Meg is happy to see the trio again and thanks them for helping the town. Concerned by the fire, Hercules tells Meg, Phil, and Pegasus to find safety while he and the trio will search the city for any trapped townspeople. Meg agrees and wishes them luck, before departing with Phil and Pegasus.

As they watch Pegasus go, Goofy notices a call for help in the distance. He alerts the others and Hercules is able to find the source: a young girl trapped on a unsteady rock pile. Knowing running will not be able to get them to the girl in time, Hercules instructs the trio to climb onto the Hercules statue that was toppled during the Heartless attack. Once the trio are settled, Hercules lifts the statue and launches it in the direction of the girl.

The girl is rescued and thanks the team before heading away to safety. Sora, Donald, and Goofy are not alone for long, however, as a dark corridor opens behind them and Maleficent and Pete step through. Maleficent sneers at the presence of "the King's pawns", but is quick to deny involvement when Sora accuses her of summoning the Heartless. Pete seems to notice a difference in Sora, and is glad to point out that Sora seems weaker than before and possibly easy to defeat. Maleficent, however, dismisses this, citing a more pressing matter to attend. Pete lets slip that this is their search for a black box, a reveal that greatly irritates Maleficent. With one final pointed comment each about the trio's unimportance, Maleficent and Pete head back through the dark corridor, with Sora failing to stop them from getting away.

Visibly upset by Pete's comments, Sora is left deflated and frowning, but insists he is fine when Donald and Goofy ask if he's okay. Knowing he isn't being entirely truthful, Donald and Goofy tell Sora that he'll definitely get stronger, a statement that only seems to frustrate Sora more.

Hercules turns to see Pegasus landing in the square with Meg and Phil on his back. Meg jumps to the ground.

Hercules runs over to meet them.

Meg surveys the wreckage of the town.

Hercules: "No, not with the Heartless involved. We're just lucky our friends showed up."

Sora, Donald, and Goofy are revealed to be standing behind Hercules. Sora chuckles and places his hands on his hips, Donald crosses his arms, and Goofy scratches his head.

Megara: "Sora, Donald, Goofy, guess I owe you a big thank you."

The camera pans back to Hercules, who looks concerned.

Hercules: "Meg, you need to stay someplace safe. We'll search the city and make sure everyone manages to get clear of the fire."

Meg's brow furrows and she clutches her hands to her chest.

Sora places his hands back on his hips, Donald nods, and Goofy salutes.

Hercules: "Phil, you should go with Meg."

Phil nods and he and Meg climb back onto Pegasus. Hercules walks over and strokes Pegasus' mane, causing Pegasus to whinny.

Hercules: "You gotta keep her safe."

Pegasus nods and adopts a fiercely serious expression. He gives one more whinny and then kicks off, flying up, over, and away from Thebes. The remaining group watch Pegasus, Meg, and Phil disappear into the smoky sky.

While the others don't seem to have noticed the cry for help, Goofy looks left and right. He lifts an ear and cups a hand to the side of his head.

Unnamed Olympus Girl: "Is anyone theeere?"

Sora and Hercules turn to Goofy.

Hercules: "From which way?"

Goofy points towards some flaming buildings.

Hercules steps forward and, with a curious hum, narrows his eyes. In the distance, he sees a young girl standing atop a pile of rocks and pressing herself against the wall.

The girl gasps and almost slips atop the rocks.

Hercules: "Oh no! There's a little girl caught in the fire!"

Sora skids to a stop with a panicked groan.

Sora: "Then, what's the other choice?"

Hercules hums and looks around. He sees the fallen statue of himself and gives a pleased gasp. He points at the statue.

Hercules: "Get on that."

The scene changes to show Donald and Goofy sitting on the statue's back while Sora climbs up to join them.

Sora settles down in front of Donald and Goofy and leans over to talk to Hercules.

The trio place their hands on the statue. Suddenly the statue begins to rise, leaving the trio to hold on tight as they are jostled side to side.

Hercules is revealed underneath the statue, having lifted it onto his shoulders.

Sora, Donald, and Goofy yell as the statue is lifted higher. With gritted teeth, Hercules aims and then launches the statue into the distance. Donald and Goofy's screams streak through the sky as they are sent flying over Thebes.

Sora: "Oh no! Not agaaaaaain!"

Fade in on a wall. The camera pans down, showing Sora, Donald, and Goofy lined in front of the Unnamed Olympus Girl, who is now safely on the ground.

Unnamed Olympus Girl: "Thank you for saving me."

The girl bows at the trio.

The girl runs off, laughing happily. Sora turns to Donald and Goofy.

Sora: "We'd better check and see if anyone else needs us."

Goofy gives an agreeing hum and he and Donald nod.

The camera changes to view the trio from a place behind them and a whirring windy sound is heard. A golden staff and the edge of a black cloak step into view.

"Villains of a Sort" begins to play.

The trio turn around and gasp. Maleficent and Pete are revealed, walking out of a dark corridor.

The trio summon their weapons.

Sora: "Are you the reason the Heartless are here?"

Pete: "Say, Maleficent, I dunno about his sidekicks, but Kid Keyblader here looks way punier than the last time we saw him."

The camera zooms in on Sora's face as he sighs, visibly upset by Pete's taunts.

Pete: "I say we finish him off while we still can."

Sora scowls and grits his teeth.

Maleficent: "Waste no time with the boy. He's inconsequential. We have a far more pressing matter to attend to."

Pete crosses his arms and furrows his brows, humming in thought and then smiling.

Maleficent: "Be silent, you fool!"

Maleficent: "As for you three: we shall meet again..."

Maleficent turns and speaks over her shoulder.

Maleficent: "when I have time for such trifles."

Maleficent returns to the dark corridor.

Pete: "Yeah, and youse better get your act together before then."

Pete turns, waving goodbye, and heads for the corridor.

Pete enters the corridor and it closes before Sora can reach him. Sora groans as it disappears and then hangs his head with a sigh. Donald steps forward and raises a hand in Sora's direction.

Sora sighs again, then turns around. His expression is downcast.

Goofy: "Gawrsh, it sure don't sound like it. Did Pete sayin' mean things bother ya?"

Sora crosses his arms and diverts his gaze to the ground.

Donald Duck: "You're gonna get stronger!"

Goofy raises a hand to the side of his mouth to project his voice.

Sora turns to his friends. He places his hands on his hips and throws his head back in exasperation.

Goofy: "I just said what he said."

Donald Duck: "He can take it!"

The camera lowers and gameplay resumes.