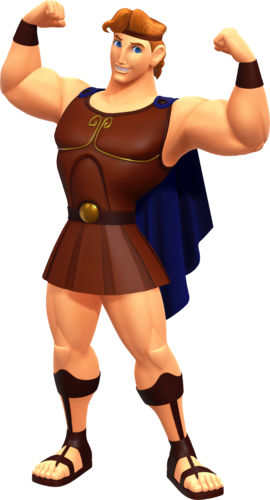 Hercules, son of Zeus and Hera, is a supporting protagonist in the Kingdom Hearts series. He originates from Disney's 1997 animated film Hercules

Hercules does not appear in Chain of Memories, but instead a figment of him is created based off of Sora's memories from Kingdom Hearts. Because Hercules, and every other denizen of Olympus Coliseum in Chain of Memories, is just a recreation of a memory, they act the same way they did at the start of the first game before meeting Sora.

In the first act of the world, Phil is about to cancel The Games because no one except Hercules made it past the preliminary course. Sora shows up and convices Phil to put the games on anyway so that he can fight Hercules. Hercules agrees to these conditions, and Cloud shows up and joins The Games as well.

In the third act of the world, Cloud attacks Hercules. The two wear each other down in a fight when Sora shows up to break it up. Hades then shows up, berating Cloud for failing to kill Sora and Hercules, telling them the deal to restore his memories is off. Hades declares he will finish Hercules off as Hercules is weak from his fight with Cloud, but Sora steps in to defeat Hades.

Eighteen years ago, the Fates looked into the future and predicted Hades would succeed in taking over the cosmos and dethroning Zeus. As Sora, Donald, and Goofy are moments from arrival, Hades has released the Titans (including the previously confronted Rock Titan and Ice Titan) and started his war against the Gods.[1]

In Olympus's township, Hercules is surprised by screams coming from up above and is shocked to see Sora, Donald, and Goofy flying through the air. He jumps to action and manages to save Sora and Goofy, but Donald is not so lucky and ends up getting caught in the mouth of a lion statue, where he furiously yells for help as he dangles helplessly. After Hercules gets them back on the ground, Sora, Donald, and Goofy are quick to notice the fiery destruction plaguing the town. Hercules explains Hades is to blame, which prompts Sora to tell him that Hades had revealed to them that he plans to take over the cosmos. Hercules is unfazed and declares he will have no problem thwarting the villain once again.[2] As the group continue their walk through Thebes, Hercules asks Sora why he has returned. Sora asks how Hercules was able to regain his strength when he saved Megara during their last visit to Olympus Coliseum. Hercules explains he isn't sure where his strength came from, only that he wanted to save Meg with all his heart.

The reunion is interrupted when Donald sees fire raining from the sky and soon the town is swarmed by a rain of Heartless that quickly sets to lighting more fires around Thebes. Weapons are summoned and the heroes band together to make quick work of the Heartless menace.[3] After the fight they are visited by Megara and Philoctetes, who arrive riding atop Pegasus. Concerned by the fire, Hercules tells Meg, Phil, and Pegasus to find safety while he and the trio will search the city for any trapped townspeople. Meg agrees and wishes them luck, before departing with Phil and Pegasus. As they watch Pegasus go, Goofy notices a call for help in the distance. He alerts the others and Hercules is able to find the source: a young girl trapped on a unsteady rock pile. Knowing running will not be able to get them to the girl in time, Hercules instructs the trio to climb onto the Hercules statue that was toppled during the Heartless attack. Once the trio are settled, Hercules lifts the statue and launches it in the direction of the girl, allowing the trio to rescue her.[4]

Later, after clearing the rest of Thebes of townspeople, Sora, Donald, and Goofy reach a large building on the outskirts of the town. They head inside and find Hercules struggling to hold the collapsing building on top of his back, while three townspeople huddle below him. Things only get worse when the other side of the building collapses, blocking the exit, and then a horde of Flame Cores materialize. Hercules tells Sora to protect the townspeople while he keeps the building upright.[5] After they defeat the swarm of Heartless, Hercules orders the trio to get the townspeople out of the building before it falls. Sora hesitates to leave Hercules to hold the building up on his own, but decides to trust Hercules' strength and runs outside. The group barely clears the area before a great rumble surrounds them and they are forced to huddle together as the building finally collapses. When the shaking stops and the dust clears, the trio are devastated to see the building in ruins, with Hercules still inside. Thankfully their grief is short-lived, as Hercules then emerges from the rubble unscathed.

As everyone celebrates Hercules' heroism, the opening of a dark corridor interrupts the joy. Xigbar appears, clapping sarcastically in mock of their triumph. While the trio and Hercules glare him down with open hostility, Xigbar admonishes their desire to put others first and goes on to dismiss the idea of strength through connecting hearts, insisting that putting too much power in one place will lead to those hearts breaking. Despite push-back from Hercules and Sora, Xigbar remains unmoved and leaves just as suddenly as he had arrived. Sora is left obviously confused and concerned, but Hercules assures him that eventually they'll prove that their sacrifices aren't in vain. Sora is cheered and his sunny disposition returns, but as the group leaves they don't notice Sora lagging behind, furrowing his brow and pondering over Xigbar's words.[6]

The group continues until they reach the town center, where a giant Heartless is rampaging. Battle ensues and, upon the Heartless' defeat, Megara, Pegasus, and Philoctetes return. Meg informs them that no-one else is in trouble. Their victory is short-lived, as they quickly notice a dark storm brewing around Mount Olympus. Knowing the cause to be Hades, Sora, Donald, and Goofy determine to go with Hercules to defeat the villain once again.[7] The group discovers the water on the mountain is dangerously high and raging angrily, but through dispatching multiple groups of Water Cores, the rivers and waterfall return to their normal peaceful state. As Sora, Donald, Goofy, and Hercules climb further up Mount Olympus, the ground around them begins to shake. Concerned about the happenings above them, Hercules begins to worry for his family. He summons Pegasus and tells the others he will fly ahead. Sora is intrigued by the mention of his family and Hercules reveals that his dad is the king of the gods. Hercules and Pegasus fly off, leaving Sora, Donald, and Goofy in shock.[8]

Later, at the Realm of the Gods, Hades has completed his conquest. The Ice Titan and Lava Titan have trapped Zeus in a rock prison and Hades sits back, pleased to finally be in charge. His victory is short-lived, however, as Hercules (atop Pegasus), Sora, Donald, and Goofy arrive. Hercules flies in and frees the rest of the gods Hades had in chains, then he joins Sora, Donald, and Goofy in facing the Titans in battle.[9] Although a valiant fight ensues, all three Titans remain standing. Things only get worse when the Rock Titan suddenly joins the battle. To assuage his doubts, Sora confidently reminds Goofy that there's four of them to take the four of the Titans, prompting Hercules to note that he can make it five. Hercules then jumps onto the rock cone imprisoning Zeus and breaks it apart, setting his father free. Zeus quickly gets to work, pelting the Titans with lightning bolts. The Titans attempt to flee, but Hercules captures the Tornado Titan and uses it to gather the other three Titans together. He flings the monsters far out into space, effectively destroying them. Hades fumes about his loss and prepares to attack Sora, Donald, and Goofy, before being interrupted by Hercules and told to leave. As he accepts his loss and starts to retreat, Hades is once again stopped by Hercules. Confused, Hades turns and Hercules punches him right in the face, citing it as punishment for attacking Thebes. Hades threatens to attack Meg as he leaves, but Zeus hits him with a lightning bolt, shutting the lord of the Underworld up for hopefully a long time.[10]

After defeating Hades and the Titans, Sora, Donald, Goofy, and Hercules make their way out of the Realm of the Gods. Sora, Donald, and Goofy ask Hercules if he's sure he wants to leave his home and family in Olympus, but Hercules explains that if he stayed, he wouldn't be able to be with the person he loves most, Meg. As he finishes his explanation, he notices Meg waiting outside the gates of Olympus and runs to embrace her. When Sora, Donald, and Goofy catch him up, Hercules remembers Sora's earlier question and asks if he can help with an answer. Sora, however, declines the offer, having concluded that he is meant to figure the answer out for himself. He determines that he'll find his strength by, like Hercules, finding something to fight for with all his heart.[11]

Hercules has a muscular build, bright blue eyes, and a brown headband pushing back his ginger red hair.