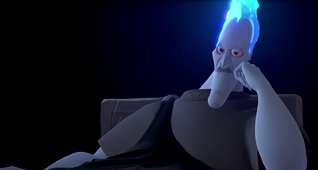 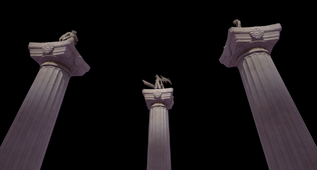 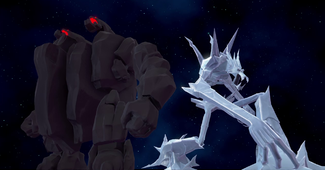 "Hades' Ambitions" is a cutscene in Kingdom Hearts III. It explains Hades' previous attempts at taking over the cosmos and reveals the war he is currently raging on Olympus.

Eighteen years ago, the Fates looked into the future and predicted Hades would succeed in taking over the cosmos and dethroning Zeus. Though his previous attempts using Terra, Cloud, and Auron were failures, now the time for Hades' victory has arrived and his ultimate plan has been put into motion. As Sora, Donald, and Goofy are moments from arrival, Hades has released the Titans (including the previously confronted Rock Titan and Ice Titan) and started his war against the Gods.

The screen is black.

Narrator: "At long last, the time had come. The planets were edging into perfect alignment..."

A blue flame bursts into life in the darkness.

Narrator: "and the plan Hades devised eighteen years ago was about to reach fruition."

The camera zooms out, revealing Hades is holding the flame. He slouches in a stone chair and snuffs the flame out with a clench of his fist.

Narrator: "The Fates had predicted this very future—the day he would seize control of Olympus and rule over all the cosmos."

At the mention of their names, stone carvings of Hades' previous pawns flash on the screen. The camera zooms out, showing the three statues in a circle, each placed on a tall pillar.

The statues explode into sparks of blue light.

Narrator: "The hour was not yet right."

The sparks spiral into trails of light and fly upwards through the darkness, spreading and dissipating to form a starry night sky. Six of the stars grow and shine brighter, forming a constellation. The fourth and fifth stars move across the screen until the constellation becomes a column, the planets aligning. The screen fades to black.

Narrator: "But now, the planets were aligned and nothing could possibly go wrong."

A blue vortex swirls on the screen and the camera zooms in on the black hole at its center. A crosshatch of electric pink lines can be seen, a grid blocking the hole. The camera zooms in on the hatch as a giant fist punches through it. The camera zooms out and the fist is revealed to belong to the Rock Titan. As it staggers away, the Ice Titan heaves itself through the hole in the ground and steps forward too. Both Titans stop beside each other, posed menacingly. The screen is engulfed by flames.

Narrator: "A wave of darkness lanced down from their celestial rank, and one by one, Hades freed the Titans from their prison—some of them the same monstrosities that Sora and his friends had already fought and bested before."

The camera pans down the flames and reveals Hades, who smirks as red fire blasts off his shoulders and hair.

Narrator: "With both the Titans and his longing vengeance against Zeus reinvigorated, Hades began his attack on Olympus."