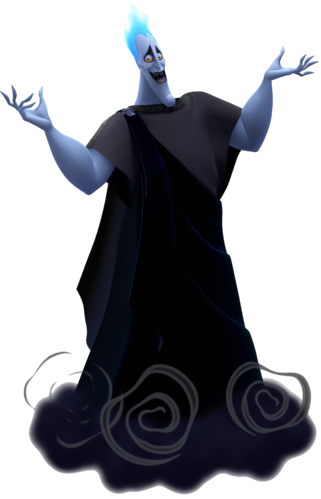 Hades is the Lord of the Dead and a major antagonist in the Kingdom Hearts series. He originates from Disney's 1997 animated film Hercules

Hades does not appear in Chain of Memories, but instead a figment of him is created based off of Sora's memories from Kingdom Hearts. Because Hades, and every other denizen of Olympus Coliseum in Chain of Memories, is just a recreation of a memory, they act the same way they did at the start of the first game before meeting Sora.

Upon Sora entering the world, Hades is planning to kill Hercules using The Games as a front to enter a mercenary to take Hercules out. It is revealed that Hades has hired Cloud as his mercenary for the price of helping him recover his missing memories.

In the second act of the world, Cloud reveals his plan to kill Hercules to Sora, and so Sora fights and defeats him. Cloud disapears before Sora can deal the final blow.

In the third act of the world, Sora finds Hercules and Cloud fighting. However, dissapointed that Cloud failed to defeat Sora earlier, Hades appears and attempts to finish Hercules off himself. Sora steps in to protect Hercules and defeats Hades.

Eighteen years ago, the Fates looked into the future and predicted Hades would succeed in taking over the cosmos and dethroning Zeus. As Sora, Donald, and Goofy are moments from arrival, Hades has released the Titans and started his war against the Gods.[1]

In their search for Olympus Coliseum, Sora, Donald, and Goofy become lost in Olympus. Pausing at a mountain edge, Sora decides to shout for Hercules, but instead he catches the attention of Hades, who makes an unwelcome appearance. At first Hades is irate at the trio's mentions of Hercules, but he quickly calms himself and reveals that he is once again planning to conquer the cosmos. The trio are far from enthusiastic to see their old foe again and Sora openly dismisses Hades' aspirations. At this Hades calls upon the Titans, and suddenly Sora, Donald, and Goofy find themselves assaulted by earthquakes, icy cold, lava, and, finally, a veracious wind that sweeps them clean off the mountain and throws them off into the distance. Pleased with his display of power, Hades watches the trio disappear and then thanks the Titans, who leave. Once he is alone, a dark corridor opens behind Hades and Maleficent and Pete step through. The conversation between the once upon a time allies is not pleasant, but Hades is intrigued when Maleficent reveals she is looking for a black box. Hades asks her if she is thinking of the box he knows Zeus has buried on earth, which brings a small smile to Maleficent's face.[2]

Later, Sora, Donald, and Goofy--since reunited with Hercules--notice a dark storm brewing around Mount Olympus. Knowing the cause to be Hades, Sora, Donald, and Goofy determine to go with Hercules to defeat the villain once again.[3] At the top of Olympus' Realm of the Gods, Hades has completed his conquest. The Ice Titan and Lava Titan have trapped Zeus in a rock prison and Hades sits back, pleased to finally be in charge. His victory is short-lived, however, as Hercules (atop Pegasus), Sora, Donald, and Goofy arrive. Hercules flies in and frees the rest of the gods Hades had in chains, then he joins Sora, Donald, and Goofy in facing the Titans in battle.[4] Although they put up a valiant fight, all three Titans remain standing. Things only get worse when the Rock Titan suddenly joins the battle. To assuage his doubts, Sora confidently reminds Goofy that there's four of them to take the four of the Titans, prompting Hercules to note that he can make it five. Hercules then jumps onto the rock cone imprisoning Zeus and breaks it apart, setting his father free. Zeus quickly gets to work, pelting the Titans with lightning bolts. The Titans attempt to flee, but Hercules captures the Tornado Titan and uses it to gather the other three Titans together. He flings the monsters far out into space, effectively destroying them. Hades fumes about his loss and prepares to attack Sora, Donald, and Goofy, before being interrupted by Hercules and told to leave. As he accepts his loss and starts to retreat, Hades is once again stopped by Hercules. Confused, Hades turns and Hercules punches him right in the face, citing it as punishment for attacking Thebes. Hades threatens to attack Meg as he leaves, but Zeus hits him with a lightning bolt, shutting the lord of the Underworld up for hopefully a long time.[5]