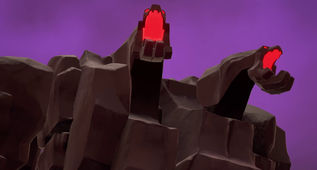 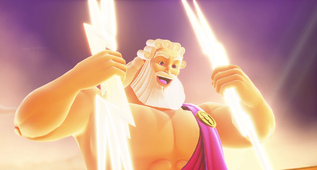 "A Sore Loser" is a cutscene in Kingdom Hearts III. It shows Hercules freeing Zeus and them working together to defeat the Titans and banish Hades.

Although Sora, Donald, Goofy, and Hercules have put up a valiant fight against the Ice Titan, Tornado Titan, and Lava Titan, all three Titans are still standing. Things only get worse when the Rock Titan suddenly joins the battle. To assuage his doubts, Sora confidently reminds Goofy that there's four of them to take the four of the Titans, prompting Hercules to note that he can make it five. Hercules then jumps onto the rock cone imprisoning Zeus and breaks it apart, setting his father free.

Zeus quickly gets to work, pelting the Titans with lightning bolts. The Titans attempt to flee, but Hercules captures the Tornado Titan and uses it to gather the other three Titans together. He flings the monsters far out into space, effectively destroying them.

Hades fumes about his loss and prepares to attack Sora, Donald, and Goofy, before being interrupted by Hercules and told to leave. As he accepts his loss and starts to retreat, Hades is once again stopped by Hercules. Confused, Hades turns and Hercules punches him right in the face, citing it as punishment for attacking Thebes. Hades threatens to attack Meg as he leaves, but Zeus hits him with a remaining lightning bolt, shutting the lord of the Underworld up for hopefully a long time.

Fade in on Sora, Donald, Goofy, and Hercules standing with weapons drawn across from the towering Ice, Tornado, and Lava Titans. Suddenly, outside the Apex, the Rock Titan roars into view, crashing through the ground and smashing a fist onto the columns lining the area. The Rock Titan roars at the sky and Donald groans.

Hercules: "Actually, I think I can make it five."

Hercules jumps to the top of the mound where Zeus is trapped. He digs his fingers into the rock and, with a tense groan, tears it apart. With a bright burst of light the top of the prison bursts apart and Zeus is freed. Hades, watching aghast, screams "No!". Zeus chuckles and puts his hands on his son's shoulders.

On the ground, Sora, Donald, and Goofy are shown jumping for joy, throwing their hands in the air.

Zeus is shown again, a bundle of bright lightning bolts now held in each of his fists. He pumps his arms over his head, waving the bolts, then shakes the bolts in front of his chest before stretching into a heroic pose.

The Ice and Rock Titan's mouths drop open. Cut to show Zeus fling one hand of lightning with a grunt. Cut to the Rock Titan's head as the bolts hit square in one of its faces, exploding in bright chunks of gold, followed by another lightning hit to its other face. Cut to show the Lava, Ice, Rock, then Tornado Titan all turn and slowly make a run for it. Cut to Hercules back on the ground, grunting as he sees the Tornado Titan passing behind him. He gasps and runs after the Titan, quickly closing in and then grabbing its lower end, squeezing its tornado funnel into a thin tube. Hercules yells with effort and turns in a circle, continuing the momentum to wave his arms around his head, sending the Tornado Titan whipping around the Apex like a wily lasso. Hercules flicks his arm forward and the Tornado Titan slams ahead, sucking the Rock, then Ice, then Lava Titans into its center. With one last strong yell, Hercules spins and then hurls the Tornado Titan off the Apex. The Titans soar into the sky, then into the stars, where we see them explode with catastrophic force, alighting space with fire for a brief moment before fading into nothing.

Back at the Apex, Zeus and Hercules laugh and high five. Cut to Sora high-fiving Goofy then Donald as Donald exclaims "Yeah!".

Cut to Hades, who is looking up at the sky and groaning with clenched teeth. He turns to face the group.

Hades: "I can't believe it! I put eighteen years into that plan and you blippin' ruined it!"

He jabs a finger towards Sora.

Sora: "Just give it up already! You'll never beat Herc, no matter how many times you try."

Goofy: "Yeah, stay in the Underworld where ya belong."

Donald Duck: "Go have the time of your afterlife."

Hades: "Enough already! I did not come this far to be ridiculed by Zeusy high and mighty, his little sunspot,"

Hades: "and a trio of clowns! You know what? I'll just go ahead and destroy you!"

Hades growls and groans as he slowly turns his head to looks at Hercules. Hercules, standing beside his father, smiles and sweeps his arms towards the gate.

Hercules: "The exit is that way."

Hades growls and glances towards Sora, Donald, and Goofy. He slumps and, with an "Oy vey", turns back to blue flame. Begrudgingly, mumbling "Geeze Louise", he begins to walk away.

Hercules: "Hold on. I almost forgot."

Hades stops moving and looks over his shoulder, only to be slammed in the face by Hercules' fist. Hades is thrown off his feet and crashes to the ground, grunting and groaning. Hercules straightens out of his punching form and smiles.

Hercules: "That one's for trying to wreck Thebes."

Hades sits up, massaging his jaw.

Shadows begins to swirl in circles around Hades.

Hades: "I have a very, very long memory!"

Behind Hercules, Zeus looks at the last remaining lightning bolt still in his hand and laughs.

Hades: "I can still dunk your little Nut-Meg in a river of de—"

With a casual flick of the wrist, Zeus flings the lightning bolt towards the small black cloud that is all that remains of Hades' disappearing act. Before the portal closes completely, we hear a grunt from Hades that lets us know that the lightning hit its target. The screen fades to black.

A Sore Loser
Retrieved from "https://www.khdatabase.com/index.php?title=Transcript:Kingdom_Hearts_III/Chapter_I:_Olympus/A_Sore_Loser&oldid=18644"