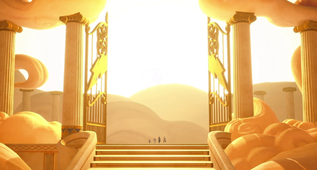 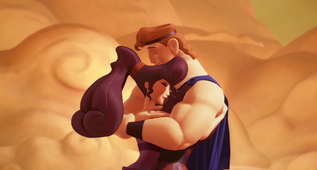 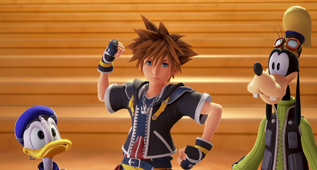 "Where He Belongs" is a cutscene in Kingdom Hearts III. It shows Hercules telling Sora, Donald, and Goofy why he chooses not live in Olympus' Realm of the Gods.

After defeating Hades and the Titans, Sora, Donald, Goofy, and Hercules make their way out of the Realm of the Gods. Sora, Donald, and Goofy ask Hercules if he's sure he wants to leave his home and family in Olympus, but Hercules explains that if he stayed, he wouldn't be able to be with the person he loves most, Meg. As he finishes his explanation, he notices Meg waiting outside the gates of Olympus and runs to embrace her.

When Sora, Donald, and Goofy catch him up, Hercules remembers Sora's earlier question and asks if he can help with an answer. Sora, however, declines the offer, having concluded that he is meant to figure the answer out for himself. He determines that he'll find his strength by, like Hercules, finding something to fight for with all his heart.

Fade in on a shot of the gates to the Realm of the Gods. With a loud creak the gates swing inward and the small silhouettes of Sora, Donald, Goofy, and Hercules run through. Cut to a shot of the top of the stairs as Sora, Donald, and Goofy rush down the golden staircase. Before following, Hercules pauses and looks back at the gates. Close-up on Hercules' thoughtful expression as low footsteps approach him from behind. At the sound of a voice, Hercules turns his head.

Sora: "Are you sure you want to leave all this behind?"

The camera pans across to show Sora, Donald, and Goofy have returned.

Donald Duck: "And your family."

Hercules: "I can see my family anytime I want. If I stayed, I'd have to be apart from the person I love most... And that life would be empty."

The camera pans out and down, revealing Meg standing at the bottom of the stairs. Her hands are clutched to her chest and she sighs. Cut back to Hercules, who smiles as he looks down at her.

Hercules: "I finally know where I belong."

Cut to Meg. Her face lights up and she opens her arms in welcome.

Hercules runs down the stairs. He and Meg tightly embrace. Meg sighs happily. Behind them, Sora, Donald, and Goofy walk down the stairs. Hercules' eyes pop open, he lets Meg go, then turns to face the others. Sora places his hands behind his head.

Hercules: "Sora, we never got back to your question. Can I help?"

He swings his arms down and clenches his fists.

Sora: "I think I'm meant to figure it out for myself. I'll find my strength the way you found yours. Something to fight for...with all my heart."

Sora: "I guess you did have the answer."

Hercules: "Well, you've got heart, Sora. Just keep at it and I know you'll be stronger than ever."

Sora: "Yeah, I might even end up stronger than you are."

Donald Duck: "There he goes again."

The camera zooms out and above the group as they laugh. The Olympus world logo fades over the scene. The screen fades to black.

Where He Belongs
Retrieved from "https://www.khdatabase.com/index.php?title=Transcript:Kingdom_Hearts_III/Chapter_I:_Olympus/Where_He_Belongs&oldid=18647"