Seekers of the Black Box 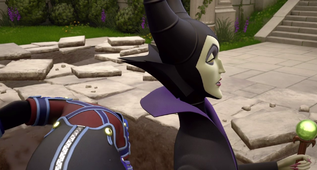 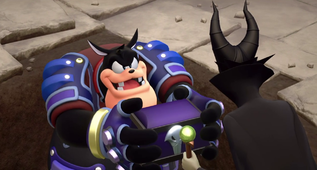 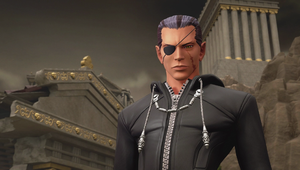 "Seekers of the Black Box" is a cutscene in Kingdom Hearts III. It shows Maleficent and Pete searching for a black box in Olympus.

Following a lead from Hades, Maleficent and Pete are digging up the ground in Thebes' Gardens in search of a black box. Pete questions whether the box--which supposedly contains the Book of Prophecies--really exists, but Maleficent is certain of her need for the book and explains that the existence of the box--evidently told to her by someone in black--is the only clue she has and must be investigated. Pete doubles down on his doubt, but the conversation is dropped when he finds something in the ground: the Pandora's Box Hades told them about. Upon inspection, Maleficent tells Pete to leave it behind, knowing it is not the box they need. Disappointed, the pair leave Olympus.

Xigbar is revealed to be standing on a rooftop some distance away, having been watching the pair the whole time.

Loud grunting is heard as the camera fades in on a panning shot of Thebes' Gardens. Pete is revealed, burrowing a hole through the stone path with his bare hands. The path is dismantled all around him, indicating this is not the first hole he has dug.

Pete: "Are you sure this box with the Book of Prophecies is for reals? I think that dingbat in black was pulling your leg."

Cut to show Maleficent, scowling with her back to Pete.

Maleficent: "Be quiet and dig, you imbecile."

Maleficent: "I must find that Book of Prophecies and make it my own. His was the only clue we have. We cannot afford to dismiss it without a thorough investigation."

Pete: "I'm just sayin', a shot in the dark ain't gonna get us any closer to—"

Pete stops digging, looks down, and gasps "Woah!". Maleficent spins to face him.

Maleficent: "What is it? Have you found something? Show it to me at once, fool."

From the ground, Pete lifts a purple box with a metal skull-like clasp on its front. He holds it out to Maleficent.

Pete: "Yes sir-eesy, this has gotta be that Pandora's Box Hades mentioned."

Maleficent's eyebrows furrow as she inspects the box. Abruptly, she turns away.

Pete: "What? After all that diggin'?"

Maleficent: "That is not the box which I desire. We are finished with this world. Come."

With a devastated expression, Pete tilts the box to look at it one last time. He sags, straightens, then tosses the box over his shoulder, back into the hole. Cut to a shot from above as he scampers after Maleficent. When the duo are out of sight, the camera pans right to reveal Xigbar, who has been watching them. Cut to a close-up of his unreadable expression.

The screen flashes to black.

Seekers of the Black Box
Retrieved from "https://www.khdatabase.com/index.php?title=Transcript:Kingdom_Hearts_III/Chapter_I:_Olympus/Seekers_of_the_Black_Box&oldid=18649"