Return of the Titans 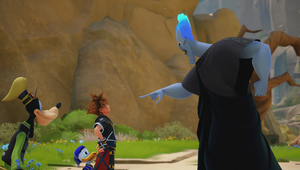 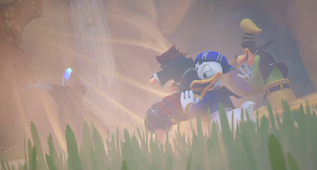 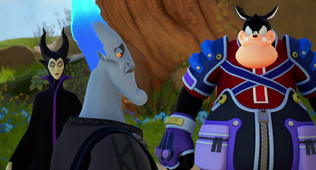 "Return of the Titans" is a cutscene in Kingdom Hearts III. It shows Sora, Donald, and Goofy discovering Hades, who subsequently uses the Titans to blow the trio off Mount Olympus. It ends with the reveal that Maleficent and Pete are also in Olympus, searching for a mysterious black box.

In their search for Olympus Coliseum, Sora, Donald, and Goofy have gotten lost. Pausing at a mountain edge, Sora decides to shout for Hercules, but instead he catches the attention of Hades, who makes an unwelcome appearance. At first Hades is irate at the trio's mentions of Hercules, but he quickly calms himself and reveals that he is once again planning to conquer the cosmos. The trio are far from enthusiastic to see their old foe again and Sora openly dismisses Hades' aspirations. At this Hades calls upon the Titans, and suddenly Sora, Donald, and Goofy find themselves assaulted by earthquakes, icy cold, lava, and, finally, a veracious wind that sweeps them clean off the mountain and throws them off into the distance.

Pleased with his display of power, Hades watches the trio disappear and then thanks the Titans, who leave. Once he is alone, a dark corridor opens behind Hades and Maleficent and Pete step through. The conversation between the once upon a time allies is not pleasant, but Hades is intrigued when Maleficent reveals she is looking for a black box. Hades asks her if she is thinking of the box he knows Zeus has buried on earth, which brings a small smile to Maleficent's face.

Fade in on Sora, Donald, and Goofy running along an open mountain path. They reach the mountain's edge and slow down to look out over the vast view.

Goofy: "I think we might be goin' in circles."

Sora crosses his arms and hums in thought. Donald puts his hands on his hips and turns to Sora.

Sora: "Did I make a turn at the wrong rock?"

Sora takes a few steps forward. He places a hand either side of his mouth to shout through.

Sora: "Hey, Hercules! Where are youuu?"

The camera pans up to the sky as a chorus of trumpets sounds. The Olympus world logo plays out.

Cut to a view of a temple built into the mountain. Above it, what looks like a small black cloud is rocketing through the sky. The cloud looks like it is going to crash into the ground, but instead it slows and lands behind Sora, Donald, and Goofy, dissipating into a puff of smoke. The trio jump to face it, gasping in surprise as the smoke grows and fills the screen.

The smoke fades to reveal Hades.

Hades: "So what gives? Who could possibly be trying to give me a migraine by yodeling that yutz's name?"

Sora places his hands on his hips.

Hades: "Don't forget...I can always turn up the heat!"

Goofy: "Wait. If Hades is here, then where's Herc?"

Hades zooms over to yell in Goofy's face.

Hades: "What is everyone's infatuation with that dolt?!"

Hades' head erupts in red flame. Just as quickly, he regains his cool and turns back to blue with a dismissive wave of his hands. He turns and starts to walk away from the trio.

Sora summons his Keyblade, Goofy his shield, and Donald his staff.

Hades turns back to the trio.

Hades: "Whoa, easy—what is this, Sparta? Kind of on a schedule. Don't have time to toss around the old fire and brimstone."

He turns his back on them again.

Hades: "The whole cosmos is basically waiting for me to, you know, conquer it!"

Sora: "Poor Hades. He thinks he can actually pull it off this time."

Hades stops and looks up to the top of the mountain, spreading his arms wide.

Hades: "Where are my Titans? Show me your power!"

"Return of the Titans" begins to play.

The sky turns black and a strong wind blows. The mountain shakes and Sora, Donald, and Goofy tremble in confusion. A dark shadow falls upon them and they look up and gasp in fear. A wave of icy air hits them and they cower against the cold. Cut to a shot of the upper mountain, large rivers of lava now spilling down its side. Back on the path, Hades stands in the cold, arms open to embrace the air.

The icy wind becomes a dusty gale force and Sora, Donald, and Goofy struggle to stay upright. They only last a few seconds before they are blown off their feet and flung off the mountain, into the distance.

Hades steps forward to watch the trio disappear from view. He holds his chin thoughtfully and grins.

His smile fades, to be replaced with a look of concern. The camera pans across the direction the trio where blown in. Hades removes his hand from his chin and frowns.

Hades: "Sailing right to where I left..."

He smiles and spins around.

Hades walks towards the higher mountains. He is cast in shade as he looks up to the mountaintop. Cut to a shot of him from above as he addresses whatever is casting the large shadow.

Hades: "Nice work, boys! So, back to the whole cosmic coup thing?"

The shadow retreats, the mountain shaking as it moves. Hades waves goodbye. Behind him, a dark corridor appears.

Hades: "Ugh. Really? Are you kidding? Geez Louise. Seriously, when it rains, it pours. Okay, who's the new pest?"

Hades turns to see Pete and Maleficent walking out of the corridor.

Pete: "Hey, now, that ain't no way to say hello, 'specially to your old friends."

As the corridor closes, Hades turns fully. For a moment he puts a finger to his head as if nursing a headache.

Hades: "Oh, perfect. Now I gotta put up with you two. Funny, I don't remember you doing me any memorable favors. So, you can keep your Heartless this time. I'm going back to my original plan. All right? So...toodle-oo! Exit's thataway. Hey, it was great seein' ya! Happy traaails!"

Maleficent: "We are not here for you. I have my own business to attend to. All I need to know is if there is a distinctive...black box...somewhere in this world? "

Hades rests his head in his hands, thinking.

He crosses his arms.

Hades: "Wait. Don't tell me...You're after the one Zeus hid on earth?"

Maleficent: "Possibly. If I were, where might it be?"

Rise of the Titans
Retrieved from "https://www.khdatabase.com/index.php?title=Transcript:Kingdom_Hearts_III/Chapter_I:_Olympus/Return_of_the_Titans&oldid=18956"