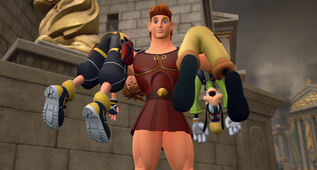 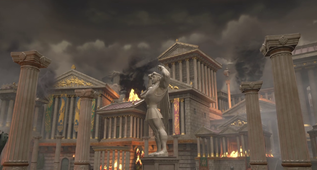 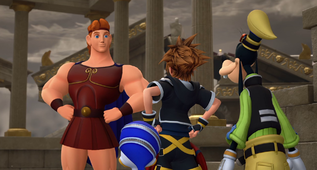 "Dropping In" is a cutscene in Kingdom Hearts III in which Sora, Donald, and Goofy are reunited with their old friend Hercules.

In Olympus' township, Hercules is surprised by screams coming from up above and is shocked to see Sora, Donald, and Goofy flying through the air. He jumps to action and manages to save Sora and Goofy, but Donald is not so lucky and ends up getting caught in the mouth of a lion statue, where he furiously yells for help as he dangles helplessly.

Feet firmly back on the ground, Sora and company are quick to notice the fiery destruction plaguing the town. Hercules explains Hades is to blame, which prompts Sora to tell him about the plans Hades had revealed to them. Hercules is unfazed and declares he will have no problem thwarting the villain once again.

We see an aerial view of a dense Grecian town. Black smoke rises from between the buildings. The camera pans across to reveal Hercules, standing on a building's ledge. He sighs, brushing his hands together. Suddenly a chorus of screams fills the air and Hercules turns and looks up to see Sora, Donald, and Goofy falling from the sky. He gasps and jumps up, sweeping Sora and Goofy from the air. He lands back on the ground with Sora and Goofy hanging over his shoulders. Sora looks across to Goofy.

Donald Duck: "Get me down!"

Hercules turns and looks up to reveal Donald caught in the mouth of a statue.

For a moment Donald waves his arms and legs, squawking furiously, before scowling and crossing his arms. The screen fades to black.

Fade in on Sora, Donald, and Goofy standing before Hercules, all four of them safely on the ground.

Hercules' face falls. The buildings behind them are shown, revealing fire eating away at everything and smoke filling the air. Hercules sighs.

Hercules: "Take a guess. Starts with an H."

Sora: "Ah, I get the picture. Actually, we bumped into the H-ster on the way here."

Goofy: "He said somethin' about conquerin' the whole cosmos."

Hercules: "All of it, huh? Nice of him to show a little self-restraint. Well, whatever he's planning, I'll send him running back across the Styx."

Hercules puts his hands on his hips and poses. Sora chuckles and mimics the pose.

Dropping In
Retrieved from "https://www.khdatabase.com/index.php?title=Transcript:Kingdom_Hearts_III/Chapter_I:_Olympus/Dropping_In&oldid=15973"