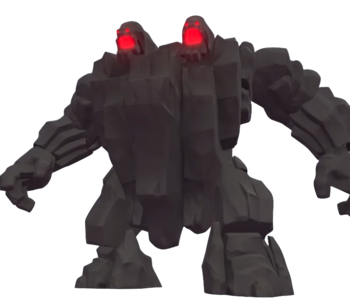 The Rock Titan is a powerful being made of rock, and an enemy first seen in Kingdom Hearts. It originates from Disney's 1997 animated film Hercules

In their search for Olympus Coliseum, Sora, Donald, and Goofy have gotten lost in Olympus. Pausing at a mountain edge, Sora decides to shout for Hercules, but instead he catches the attention of Hades, who makes an unwelcome appearance. At first Hades is irate at the trio's mentions of Hercules, but he quickly calms himself and reveals that he is once again planning to conquer the cosmos. The trio are far from enthusiastic to see their old foe again and Sora openly dismisses Hades' aspirations. At this Hades calls upon the Titans, and suddenly Sora, Donald, and Goofy find themselves assaulted by earthquakes from the Rock Titan, icy cold, lava, and, finally, a veracious wind that sweeps them clean off the mountain and throws them off into the distance. Pleased with his display of power, Hades watches the trio disappear and then thanks the Titans, who leave.[2]

Later, as Hades attacks the Realm of the Gods, Sora, Donald, and Goofy are making their way up Mount Olympus to help, only to cross paths with the Rock Titan. First the Titan tries to block their path by pelting them with boulders as the trio climb the rock face. Once this fails, the Titan retreats further up the mountain, leading to a confrontation at the rain drenched Summit. After a fierce battle the Rock Titan falls off the side of Mount Olympus and the trio watch it go. Their enemy gone, the trio celebrate, with Goofy noting that the Titans aren't that difficult on their own.[3]

At the top of Olympus' Realm of the Gods, Hades has completed his conquest. His victory is short-lived, however, as Hercules (atop Pegasus), Sora, Donald, and Goofy arrive.[4] Although a valiant fight ensues, the Lava, Tornado, and Ice Titans remain standing. Things only get worse when the Rock Titan, apparently recovered, suddenly appears to join the battle. To assuage his doubts, Sora confidently reminds Goofy that there's four of them to take the four of the Titans, prompting Hercules to note that he can make it five. Hercules then jumps onto the rock cone imprisoning Zeus and breaks it apart, setting his father free. Zeus quickly gets to work, pelting the Titans with lightning bolts. The Titans attempt to flee, but Hercules captures the Tornado Titan and uses it to gather the other three Titans together. He flings the monsters far out into space, effectively destroying them.[5]