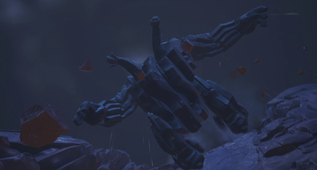 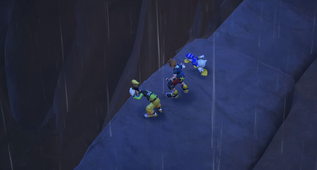 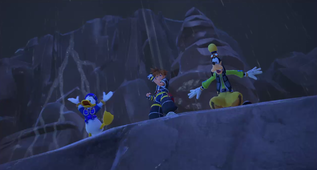 "The Rock Titan Rolls" is a cutscene in Kingdom Hearts III. It shows Sora, Donald, and Goofy celebrating after their defeat of the Rock Titan.

Sora, Donald, and Goofy have defeated the Rock Titan in battle. The large creature falls off the side of Mount Olympus and the trio watch it go. Their enemy gone, the trio celebrate, with Goofy noting that the Titans aren't that difficult on their own. Excited, Sora suggests they carry on their journey.

Fade in on the Rock Titan tipping off and then falling over the side of the mountain. It groans low as it falls, before crashing into a small cliff and then continuing to tumble to its end. The camera pans away from the falling enemy to show Sora, Donald, and Goofy standing above on a cliff edge, watching the Titan disappear. Sora jumps up in excitement.

With a "Yeah!", Sora clenches his fist. Beside him, Donald jumps up and down in jubilation.

Goofy: "They're not so tough by themselves."

Donald Duck: "That one was dumb as a rock."

Sora turns to Goofy and clenches a fist in rally.

The camera zooms out and gameplay resumes.

Son of Zeus
Retrieved from "https://www.khdatabase.com/index.php?title=Transcript:Kingdom_Hearts_III/Chapter_I:_Olympus/The_Rock_Titan_Rolls&oldid=18638"