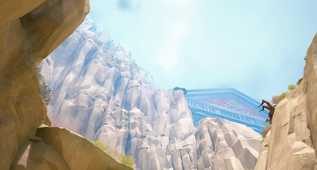 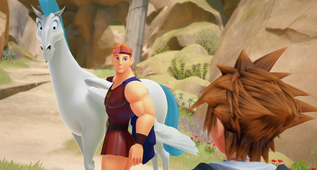 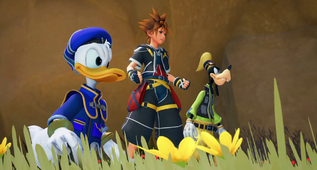 "Son of Zeus" is a cutscene in Kingdom Hearts III. It shows Sora, Donald, and Goofy learning about Hercules' parentage as they travel up Mount Olympus.

As Sora, Donald, Goofy, and Hercules climb further up Mount Olympus, the ground around them begins to shake. Concerned about the happenings above them, Hercules begins to worry for his family. He summons Pegasus and tells the others he will fly ahead. Sora is intrigued by the mention of his family and Hercules reveals that his dad is the king of the gods. Hercules and Pegasus fly off, leaving Sora, Donald, and Goofy in shock at the revelation that Hercules's dad is a god and whether that means that Hercules, by extension, might be one as well. This new information leads Goofy and Donald to think that Hercules will be okay, but when Sora reminds them that the Organization is in Olympus too, they realize they should continue on to offer help. Sora recalls his earlier conversation about strength with Hercules, and it inspires him to fight with all his heart.

Fade in on a shot of the mountain from below. The mountain begins to shake, rubble slipping down its sides. Cut to show Sora, Donald, Goofy, and Hercules on the ground, looking up at the rumbling mountain peak. Donald groans and Sora sighs.

Goofy: "This sure does feel awfully familiar..."

Hercules: "Guys, this is getting worse by the minute. I hope I'm wrong, but my family may need me."

Hercules turns and faces the sky. He brings his fingers to his lips and whistles. Cut to a shot of the group from above. Pegasus soars into frame and then down to the group. He lands with a loud neigh and a happy whinny. Hercules walks to Pegasus' side, then looks back at the trio.

Pegasus looks between Hercules and Sora, nods his head, then neighs.

Hercules hops onto Pegasus' back.

With a "Hyah" from Hercules, Pegasus takes flight. The pair fly up and disappear into the sky.

Cut to Sora, Donald, and Goofy from above. All three of them are staring at the sky with shock on their faces.

Sora: "His father is a god? But doesn't that mean Herc is a god too?"

On Sora's left, Goofy jumps forward and leans towards him.

On Sora's right, Donald jumps forward and leans towards him.

Donald, then Sora, then Goofy turn to face the path ahead.

The scene flashes to earlier. A soft light effect denotes this as Sora's memory. Hercules is stroking his chin in thought.

Hercules: "Hmm...that's tough. All I know is that she was in trouble. Suddenly, I wanted to save her with all my heart..."

The scene fades to white, then fades back in on Sora in the present, looking contemplative at the ground.

Sora: "We fight with all our heart."

Sora lifts his head. The camera zooms out to show the trio as Sora clenches his fists and Donald and Goofy nod in resolve.

The camera rotates to behind the trio and gameplay resumes.

Son of Zeus
Retrieved from "https://www.khdatabase.com/index.php?title=Transcript:Kingdom_Hearts_III/Chapter_I:_Olympus/Son_of_Zeus&oldid=18637"