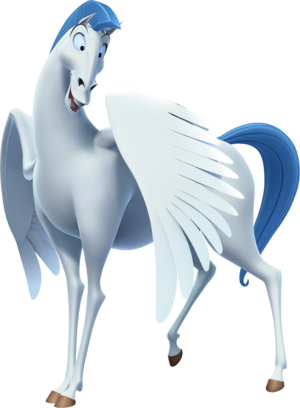 Pegasus is a flying horse from Olympus Coliseum. He originates from the 1997 Disney film Hercules.

Pegasus was created by the god Zeus as a gift for his son Hercules. Pegasus serves as faithful companion to Hercules, helping him and his allies travel around Olympus.

Eighteen years ago, the Fates looked into the future and predicted Hades would succeed in taking over the cosmos and dethroning Zeus. Hoping to fulfill his fate, Hades has released the Titans and started his war against the Gods, raining destruction over all of Olympus.[1] As Hercules, Sora, Donald, and Goofy finish fighting a swarm of Heartless in Thebes, Pegasus arrives with Meg and Phil on his back. With the city on fire, Hercules implores Meg and Phil to get to safety, which they agree to do. Hercules asks Pegasus to take care of Meg, which Pegasus gives a fierce nod to before flying his charges away.[2]

After Sora and company have scoured the city for endangered citizens, Pegasus, Phil, and Meg return. The trio have flown all over Thebes and are happy to report that all the citizens have been saved. When Sora and Hercules decide to investigate Mount Olympus, Pegasus flies off with Phil and Meg once more.[3]

When his and Sora's climb of the mountain is impeded by ominous earthquakes, Hercules becomes worried about the fate of the gods, his family. With a whistle he summons Pegasus, who soars into the mountain and picks him up. Bidding Sora farewell, Hercules and Pegasus fly off for the Realm of the Gods.[4]

Hades arrives and takes over the Realm of the Gods' Apex, entombing Zeus in a prison of rock and lava and settling down to rule over his new dominion. This victory is short lived as Pegasus and Hercules arrive, shortly followed by Sora, Donald, and Goofy. Pegasus flies Hercules to the other trapped gods, allowing him to set them free. He then swoops down so Hercules can jump to the ground, then hovers above the Apex as the fight against the Titans begins.[5]

Once Hades has been defeated and Thebes begins work on its reconstruction, the statue of Hercules in Agora is one of the first landmarks to be rebuilt. At the unveiling ceremony Pegasus stands in the crowd, sharing a proud look with Meg as the crowd cheers Hercules on.