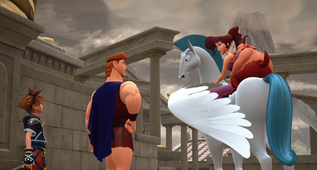 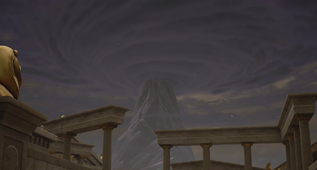 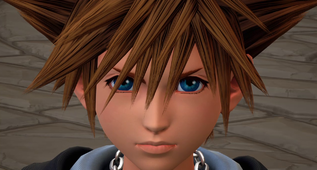 "Hades Makes His Move" is a cutscene in Kingdom Hearts III. It shows Sora, Donald, Goofy, and Hercules discovering Hades' attack on Mount Olympus and their group decision to go and stop him.

After defeating the Heartless, Sora, Donald, Goofy, and Hercules are visited by Megara, Pegasus, and Philoctetes. Meg informs them that no-one else is in trouble. Their victory is short-lived, however, as they quickly notice a dark storm brewing around Mount Olympus. Knowing the cause to be Hades, Sora, Donald, and Goofy determine to go with Hercules to defeat the villain once again.

Hercules, Sora, Donald, and Goofy watch as, with a loud whinny, Pegasus flies into the fire ridden Thebes with Meg and Phil on his back. He lands beside Hercules, who Meg turns to with a smile.

Hercules: "That's great. We did what we could."

Megara: "You heroes have been busy little bees."

Sora crosses his arms with a chuckle, Donald waves his arms with an excited "Yeah", and Goofy puts his hands on his hips and laughs. Meg chuckles at their response, then gasps as Pegasus rears his head and neighs at the distance. Meg follows Pegasus' line of sight and furrows her brow. Hercules moves closer to her side to look in the same direction.

From a wide shot from behind the group, the camera pans up to reveal Mount Olympus and the giant swirling cloud of darkness swarming the sky at its top. Hercules scowls.

The camera pans across to show Sora, Donald, and Goofy. Sora looks to Donald and they give a serious nod to one another. Sora turns to Goofy and they also share a understanding nod. Sora faces forward, his determined frown filling the screen. The camera zooms out to include Hercules in the frame. Donald and Goofy jump into battle poses.

Hercules looks over his shoulder at the trio and smiles.

With one final neigh, Pegasus, Meg, and Phil fly away. The camera zooms out and gameplay resumes.