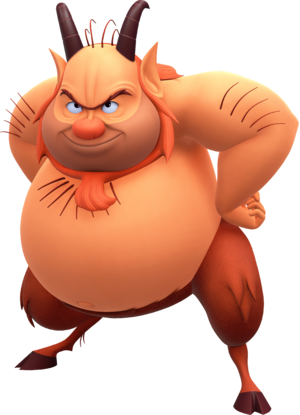 "Kid, I got two words of advice for you: Attack!"
Philoctetes, Kingdom Hearts

Philoctetes, Phil for short, is a satyr (a half man, half goat) from Olympus Coliseum. He originates from the 1997 Disney film Hercules.

Phil is a long time trainer of heroes, the most noteworthy of his protégés being the demi-god Hercules. He is often found at the Coliseum, where, after a little convincing, he offers training opportunities to those who pass through.

Phil does not appear in Chain of Memories, but instead a figment of him is created based off of Sora's memories from Kingdom Hearts. Because Phil, and every other denizen of Olympus Coliseum in Chain of Memories, is just a recreation of a memory, they act the same way they did at the start of the first game before meeting Sora.

Upon entering the world, Sora, Donald, and Goofy discover that Phil is hosting The Games. In the first act, Phil was about to cancel The Games because no one made it through the preliminary round. However, Sora and Cloud show up and convince him not to cancel, so that they can have a chance to fight Hercules. Phil agrees to this and starts The Games.

After Sora and company have scoured the city for endangered citizens, Phil, Meg, and Pegasus return. The trio have flown all over Thebes and are happy to report that all the citizens have been saved. Phil watches as a dark cloud forms around the peak of Mount Olympus. When Sora and Hercules decide to investigate, Phil and Meg leave with Pegasus once more.

Once Hades has been defeated and Thebes begins work on its reconstruction, the statue of Hercules in Agora is one of the first landmarks to be rebuilt. At the unveiling ceremony Phil stands in the crowd, reveling in the cheers of the townspeople as if they are for him and not Hercules.