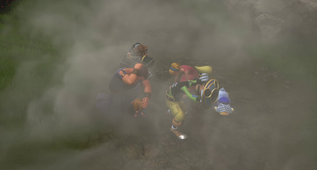 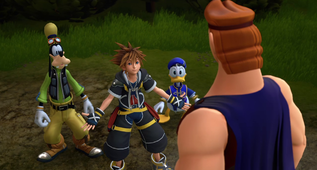 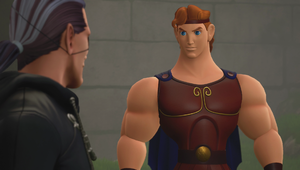 "Xigbar's Admonition" is a cutscene in Kingdom Hearts III. It involves the collapse of an Olympus building and an enigmatic appearance from Xigbar.

After Sora, Donald, and Goofy defeat the swarm of Heartless, Hercules orders them to get the townspeople out of the building before it falls. Sora hesitates to leave Hercules to hold the building up on his own, but decides to trust Hercules' strength and runs outside. The group barely clears the area before a great rumble surrounds them and they are forced to huddle together as the building finally collapses. When the shaking stops and the dust clears, the trio are devastated to see the building in ruins, with Hercules still inside. Thankfully their grief is short-lived, as Hercules then emerges from the rubble unscathed.

As everyone celebrates Hercules' heroism, the opening of a dark corridor interrupts the joy. Xigbar appears, clapping sarcastically in mock of their triumph. While the trio and Hercules glare him down with open hostility, Xigbar admonishes their desire to put others first. Hercules pushes back by recanting his previous rescue of Meg, but Xigbar brushes this off as something only possible because of Hercules' "friends in high places". Sora snaps back by praising Hercules's courage, but Xigbar simply replies that he doesn't admire people who sacrifice themselves at the risk of later needing saving themselves. Predicting Sora's thoughts, Xigbar goes on to dismiss the idea of strength through connecting hearts, insisting that putting too much power in one place will lead to those hearts breaking. Despite this, he encourages Sora to find the hearts joined to his. When Sora is unreceptive to taking his advice, Xigbar stays confident and explains that he knows Sora will end up doing what he expects and will find his reward in the end. With this final strange comment, Xigbar leaves just as suddenly as he had arrived.

Sora is left obviously confused and concerned, but Hercules assures him that eventually they'll prove that their sacrifices aren't in vain. Donald and Goofy follow up by pointing out that their teamwork has already proved successful, making Xigbar wrong already. Sora is cheered by their words and his sunny disposition returns, but as the group leaves they don't notice Sora lagging behind, furrowing his brow and wondering what exactly is the reward Xigbar was talking about.

The building is shaking and the camera zooms in on Hercules, his face twisted with the struggle of keeping collapse at bay.

Hercules: "Get the people out!"

Sora puts away his Keyblade and nods.

Sora, Donald, and Goofy run to the cowering townspeople, who slowly get to their feet. While Sora speaks, Goofy chants "Hurry, hurry!".

Sora: "Are you guys all right? You need to get to safety. Go! Quickly!"

The townspeople flee, Donald and Goofy after them, but Sora notices the building shaking again and stops and gasps, turning to Hercules. Hercules groans under the weight on his back as the shaking strengthens. Sora gasps, worried, looking between the exit and his friend in a moment of conflict, but then, with a defiant grunt, he runs after the others. We see the building from the outside as it shakes fiercely. Sora, Donald, Goofy, and the townspeople are frantically running along its side, panting heavily. As they reach the yard in front of the building, the ground quakes so strongly that they are forced to stop moving, groaning as they teeter against the rumbles in an effort to stay upright. A loud crash is heard and Goofy summons his shield to protect the group as they crouch together in fear. A huge wave of dust washes over them and the unmistakable sounds of the building's collapse ring out. Eventually the sound stops, the dust clears, the shaking stills, and Sora has the confidence to straighten up. He pants breaths of shock and fear as he walks slowly towards the pile of nothing but rubble in front of him. Donald and Goofy step beside him and together they all lean in to yell:

They straighten and the camera zooms in on the clear sorrow on Sora's face. He sighs, a mournful resignation, then looks up and gasps with surprise. Through a gap in the rubble pile, a shadow appears, and when it steps out of the dust, Hercules is revealed, dusting himself off. Sora, Donald, and Goofy jump, cheer, and pump their fists in celebration. As Hercules approaches them, he heaves a heavy sigh. Sora responds with an elated gasp.

Hercules: "That's what these are for."

Goofy laughs and he and Donald mimic Hercules' pose. Suddenly a swirling sound is heard. Sora gasps and the four friends swivel to look behind them. A dark corridor is revealed, and through it walks Xigbar, clapping his hands sarcastically.

Donald's expression is all fury and he waves his still flexed arms angrily.

Goofy is revealed to be holding the pose too, alongside a similarly angry expression.

"Aw", Xigbar coos as he smirks at the frosty welcome. He walks closer to the group.

Xigbar: "All this altruism is giving me the warm and fuzzies. So then, does having a heart of light come with an extremely good insurance policy?"

Sora: "Just say what you mean."

Xigbar: "Oh, but I did though. No good will ever come from putting other people first."

Hercules: "I was able to save Meg's life because I was ready to risk my own."

Xigbar walks to face the rubble pile, his back now to the group.

Xigbar: "Because you've got friends in high places, you mean. Tricks like that don't fly for your average joe."

Sora: "What do you know? You weren't even there! If you were, you'd admire Herc's courage."

Xigbar: "I don't admire one guy leaping into danger if it means someone else might have to jump in to save him. You're all just lining up to lose out. Dooming others to take the fall with ya."

Xigbar looks over his shoulder. Sora, Donald, Goofy, and Hercules watch him with disgusted scowls.

Xigbar: "Oh, and you can spare me the usual party line. Yes, hearts are powerful when they're connected. But if you put too much of that power in one place, some of those hearts might end up breaking."

Xigbar turns and points at the group.

Xigbar: "Still, Sora, that doesn't mean you should change. Accept the power you're given. Find the hearts joined to yours."

Sora: "Why would I ever take advice from you?"

Xigbar turns his back on them again.

Xigbar: "As if! You don't have any choice but to follow this sweet little trail of bread crumbs."

Xigbar starts to walk away.

Xigbar: "And at the end, you'll finally realize what destiny has in store for you. In fact, your reward might be right around the corner. You're so close!"

Xigbar laughs menacingly as he is swallowed by a dark corridor. Sora looks down at the ground, his face impassive.

Hercules: "Sora, don't let him bother you. He's just trying to get under your skin 'cause he thinks he can. But we'll prove him wrong. We'll show him that our sacrifices haven't been for nothing."

Sora looks up at Hercules and nods, his expression changing to one of hope.

Donald Duck: "We're a team! When we're together, we can do anything!"

Sora, Donald, Goofy, and Hercules begin to walk away. Sora stops, letting the others continue without him, and turns around. Staring at the place where Xigbar disappeared, he looks thoughtful.