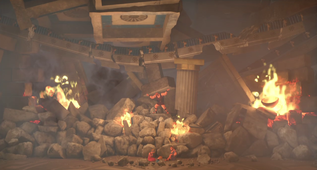 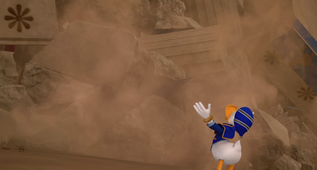 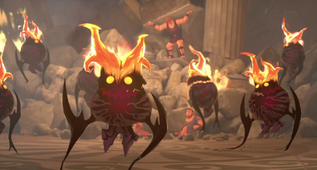 "The Collapsing Building" is a cutscene in Kingdom Hearts III. It involves Sora, Donald, and Goofy arriving to help Hercules protect a crumbling Olympus building from Heartless.

After clearing the rest of Thebes of townspeople, Sora, Donald, and Goofy reach a large building on the outskirts of the town. They head inside and find Hercules struggling to hold the collapsing building on top of his back, while three townspeople huddle below him. Things only get worse when the other side of the building collapses, blocking the exit, and then a horde of Flame Cores materialize. Hercules tells Sora to protect the townspeople while he keeps the building upright. Sora, Donald, and Goofy quickly jump to action and battle ensues.

Fade in on Sora, Donald, and Goofy running and panting up the stairs of an extravagant building. Through the open door, rubble and flame can be seen inside. Cut to face the trio as they get inside, gasp, and skid to a stop. Cut to show the other side of the room: half the building has collapsed and nothing but flame-topped rubble remains. At the foot of the rubble pile a few townspeople are huddled.

At the center top of the rubble Hercules stands, a pillar held on his shoulders, clearly the only thing stopping the whole place from toppling.

Hercules' face is contorted with effort. He looks up when he hears his name.

The townspeople are shown, whimpering and groaning. Sora, Donald, and Goofy run across the room, but are stopped halfway when everything begins to shake. The pillar slips a little on Hercules' back, but he holds steady. The area behind the trio, however, crumbles, blocking the entrance with broken stone. Donald runs over to the pile.

Sora turns at noise behind him and gasps. Flame Core Heartless have appeared, filling the space between the trio and the townspeople. The townspeople cower in fear.

Hercules: "You take them. We need to save these people!"

Sora runs up to the Heartless and summons his Keyblade.

Sora: "Herc, can you hold the building?"

Though the strain is obvious in his voice, Hercules summons a small smile.

Donald and Goofy now stand behind Sora, their own weapons drawn. The trio is poised for battle.

Sora: "Donald. Goofy. We gotta do this quick!"

The camera spins around to face the wave of Heartless and a battle begins.

The Collapsing Building
Retrieved from "https://www.khdatabase.com/index.php?title=Transcript:Kingdom_Hearts_III/Chapter_I:_Olympus/The_Collapsing_Building&oldid=18630"