Not Quite Heroes Yet 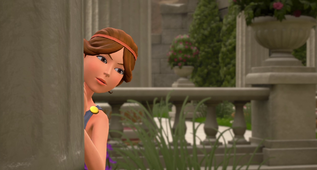 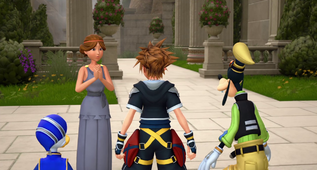 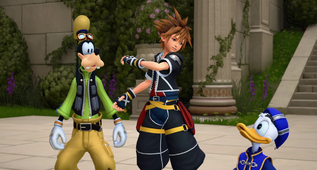 "Not Quite Heroes Yet" is a cutscene in Kingdom Hearts III. It shows Sora, Donald, and Goofy receiving praise after saving a woman from a Heartless attack in Olympus.

After they rescue her from a swarm of Flame Cores, the Olympus woman thanks Sora, Donald, and Goofy and remarks that as long as they keep training, they will become great heroes like Hercules someday. As she leaves, Sora is left disappointed by her comment, wondering if his lack of strength is really obvious. Though Donald teases that it is, Goofy remarks that they're all far from perfect, but that they can improve together, to which Sora heartily agrees.

We see the rescued woman, now on the ground and hiding behind the pillar. She peers around the column and gasps happily when she sees the coast is clear. She runs over to Sora, who straightens out of his battle stance and puts away his Keyblade as she approaches. He, Donald, and Goofy turn to face her. She clasps her hands in front of her chest.

Unnamed Olympus Woman: "Thank you. You're so kind."

Sora chuckles, satisfied. Goofy hums excitedly. All of the trio are grinning with pride.

The woman giggles, waves, and runs off.

Sora twists his torso, trying to examine his body.

Sora: "Is it that obvious?"

Donald Duck: "Just for you."

Sora puts his hands on his hips and scowls at Donald.

Goofy: "I think we all have a ways to go. But we'll get there together!"

Donald sighs and scratches the back of his head. The camera switches to view the trio from behind and gameplay resumes.

Not Quite Heroes Yet
Retrieved from "https://www.khdatabase.com/index.php?title=Transcript:Kingdom_Hearts_III/Chapter_I:_Olympus/Not_Quite_Heroes_Yet&oldid=16721"