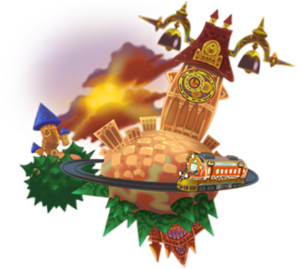 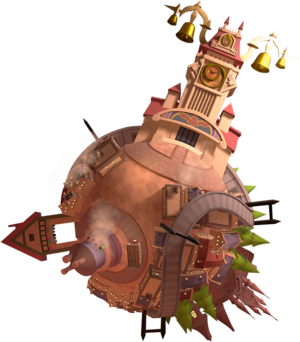 Twilight Town is a world introduced in Kingdom Hearts Chain of Memories.

A world in constant twilight, Twilight Town is where Roxas came into being. A duplicate version of the town exists as a datascape where Roxas was kept during the restoration of Sora's memories.

Twilight Town is named for its permanently setting sun, which coats the town in hazy orange light. Most of the town is built with brick in orange, brown, and yellow tones, adding to the sunset theme. Bright signs, posters, and noticeboards add splashes of color throughout the streets.

Most of Twilight Town remains familiar, with only minor layout and aesthetic changes being made between its various appearances in different games. The story often starts in a series of backstreets lined with buildings that leads to the clocktower-topped train station in one direction and the bustling Tram Common in the other. Underneath all of this lies a series of tunnels called the Underground Concourse. From the station a train can be taken to the residential Sunset Terrace, with another train sometimes appearing to whisk its riders away to The Mysterious Tower. The Tram Common in turn connects to the Woods, which leads to the mysterious Old Mansion. Access to each of these areas varies between game.

In Kingdom Hearts III, many of the previously regular areas are inaccessible and what remains has been amalgamated into an area called the Neighborhood.

Searching for a way to get Roxas back, Sora, Donald, and Goofy journey to Twilight Town. As the trio stroll down the street, they talk about the recent strange encounters they've had with past adversaries, but decide not to worry about them too much. As they reach the common, Sora is excited to see the trams again, which brings Goofy to suggest that maybe those feelings are from Roxas, excited to be back home. Sora recalls seeing Roxas in the sleeping worlds, and then Donald brings up Roxas' appearance in the Datascape, which Goofy points out was part of a test to see if Sora was ready to handle hurt. Sora thinks about this, remembering his time separated from his friends, and comes to the realization that hurting is part of caring. He follows this with the declaration that he is going to find Roxas, but as soon as he says the words out loud, a mysterious voice enters his head, quickly followed by the appearance of a group of Nobodies.[1]

As Sora and company make their way through the woods, they find a small rat surrounded by Heartless. They defeat the Heartless and bid the rat farewell, but before they can leave the rat climbs atop Sora's head. The rat tugs on Sora's hair and Sora finds himself hijacked, turning this way and that at each tug of his hair. Controlling Sora—much to the amusement of Donald and Goofy—the rat makes it clear that he is interested in the fruit on the ground. Sora offers to help him collect the fruit, under the condition that he do so on his own and not under the control of the rat. When the trio has gathered the fruit they ask the rat what he wants it for, but when he mimes his answer Sora, Donald, and Goofy are unable to understand it, so they simply wish the rat well and continue on their way.

They arrive at the Old Mansion and Sora is momentarily struck by one of Roxas' memories. He shakes it off just in time for the arrival of Hayner, Pence, and Olette, who reveal that their inquiries around town didn't yield any results. Knowing the Mansion is their last hope for clues, the group enters the abandoned building and returns to the transporter in the basement. Pence attempts to access the transporter, but finds the program blocked. Ienzo then calls Sora on the Gummiphone and explains that while attempting to decipher Ansem's code, he received an alert that someone was trying to access the terminal in Twilight Town. With Pence's assistance, Ienzo is able to set up a network between the two worlds. Intrigued by the concept of a digital world within Ansem's computer, Ienzo explains that with Pence's help, he may be able to retrieve Roxas' data from the computer. Before hanging up, Ienzo reveals to Sora that Even, the former Organization XIII member known as Vexen, has disappeared and Sora should be careful. Hayner and Olette leave, hurrying back to town for work commitments, and Sora, Donald, and Goofy head back outside.

On their way out of the mansion, Sora, Donald, and Goofy are shocked to find both Xemnas and Ansem waiting for them. Xemnas and Ansem mock Sora's attempts to bring back Roxas, pointing out the flaws in his plan, but Sora refuses to let them get to him. The pair then suggest Sora's only option is to succumb to darkness and they summon a group of Heartless and Nobodies, before retreating through a portal of darkness. Sora, Donald, and Goofy defeat the summoned enemies and then Sora thinks back on his conversation with Hercules in Olympus, about knowing with all your heart. With more conviction that ever, Sora decides he will restore Roxas, with Donald and Goofy enthusiastically agreeing to help. First, however, they decide they must head back in to town to warn Hayner and Olette of the Organization's presence, just in case.

Once in town, they run into Uncle Scrooge, who reveals that the little rat they rescued in the forest is actually Little Chef, the cook behind Scrooge's new Twilight Town restaurant, Le Grand Bistrot. Little Chef gifts the trio with a tarte aux fruit as thanks for saving him, as Scrooge explains that he recruited the rat after tasting his incredible food. Little Chef says that he'd like to cook more for the group, so Scrooge encourages them to find ingredients that he can use, a task Sora eagerly agrees to. Hayner and Olette appear and are revealed to have been working for Scrooge, putting up posters to advertise a movie festival for the town. Olette teaches Sora how to scan the posters to unlock promotional games on his gummiphone and then Sora tells the pair about the Organization's presence and warns them to keep safe. He also asks them to keep Roxas in their hearts and wish for his return, a favor they promise to fulfill.

High above the town, watching over the group, are Ansem and Xemnas, who are soon joined by Xigbar. They remark that they'll guide Sora, but if he wavers from their path, they'll destroy him.