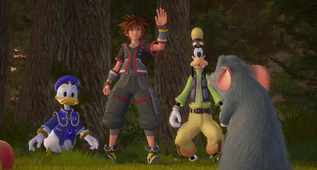 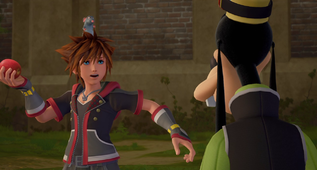 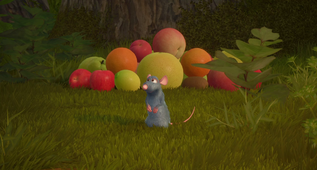 "Under Control?" is a cutscene in Kingdom Hearts III. It shows Sora, Donald, and Goofy after saving a rat from the Heartless.

Sora, Donald, and Goofy have defeated the Heartless and rescued the rat from the tree. They wish the rat farewell, but before they can leave the rat climbs atop Sora's head. The rat tugs on Sora's hair and Sora finds himself hijacked, turning this way and that at each pull of his hair. Controlling Sora—much to the amusement of Donald and Goofy—the rat makes it clear that he is interested in the fruit on the ground. Sora offers to help him collect the fruit, under the condition that he do so on his own and not under the control of the rat.

When the trio has gathered the fruit, they ask the rat what he wants it for. He mimes his answer but Sora, Donald, and Goofy are unable to understand it, so they simply wish the rat well and continue on their way.

Fade in on the rat running across the Twilight Town Woods floor, bobbing around the fruit still scattered across the grass. The rat comes to a stop, stands on his hind legs, and lowers his head in an almost pensive gesture. Cut to show Sora, Donald, and Goofy standing across from the rat. Sora lifts his hand in farewell.

Sora, Donald, and Goofy begin to walk away. The rat sniffs the air as they leave, then looks around at the fallen fruit. The rat silently sighs and his shoulders sag. He looks over to the departing trio and then runs after them. Quickly he reaches Sora and jumps onto the back of his shoe, then scales up his clothes and jumps square on top of his head. The rat grabs a fistful of hair in each paw, lifts them up, then twists his arms to the left. With a shocked "Woah!", Sora spins in circles.

Sora starts stomping back towards the trees, a sharp "Wuh" given with every jerk of his legs. Donald and Goofy pause to watch him curiously.

Donald Duck: "Are you okay?"

Sora comes to a stop in front of an apple. The rat yanks on his hair, then moves his arm down. Sora bends and scoops the apple up. He straightens with a "Wuh?", the apple held in front of his face. Behind him, Goofy is looking at the rat.

Goofy: "Lookie! That little feller's parked on your head."

Using the hair, the rat turns Sora to face Goofy.

The rat smiles and yanks his right arm up. Sora's own right arm lifts in turn.

Sora: "Would you cut that—"

With a grunted "Uh", then another "Woah", Sora swiftly bends down under the rat's control. He straightens with an "Uh?", another apple in his hands.

Goofy: "Ya know, maybe he wants you to pick up the fruit for him."

The rat's ears perk up and he smiles and nods excitedly. Sora hums, flexes his shoulders, then raises his gaze towards the rat he can't see.

The rat immediately lets go of Sora's hair and jumps down to Sora's shoulder. He climbs down Sora's arm to his hand and perches atop the apple Sora still holds.

Sora: "I just need to collect the fruit?"

The rat smiles and nods. Sora turns and surveys the fallen fruit.

The screen fades to black. Fade in on the rat standing in front of all the fruit gathered into a neat pile. The rat turns around and flips his ears up. Sora, Donald, and Goofy are shown crouching in front of him.

Sora: "So what're you gonna do with all this, anyway?"

The rat moves one of its hands in a short up and down chopping motion, then sweeps its other hand wide as if spreading something out. Sora, Donald, and Goofy look confused. With a "Huh?" and a "Hmm?", Sora looks to Donald, who shakes his head with an "Oh", then to Goofy, who shrugs his shoulder with a confused groan. The rat gives an exaggerated silent sigh. Sora, Donald, and Goofy straighten up.

Sora waves and starts to walk away. Donald waves and follows after Sora.

The rat stares after them briefly, then turns to survey the fruit. The screen fades to black.

Under Control?
Retrieved from "https://www.khdatabase.com/index.php?title=Transcript:Kingdom_Hearts_III/Chapter_III:_Twilight_Town/Under_Control%3F&oldid=18733"