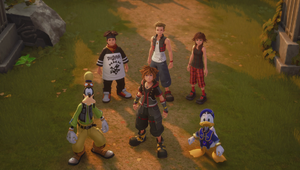 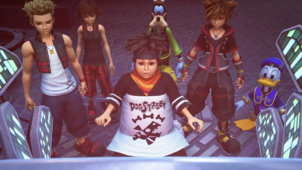 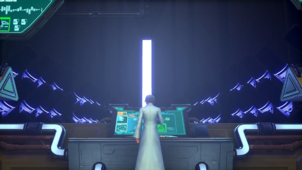 "Datascapes" is a cutscene in Kingdom Hearts III. It shows Sora, Donald, and Goofy meeting Hayner, Pence, and Olette inside Twilight Town's Old Mansion to find more information about Roxas.

Sora, Donald, and Goofy arrive at the Old Mansion and Sora is momentarily struck by one of Roxas' memories. He shakes it off just in time for the arrival of Hayner, Pence, and Olette, who reveal that their inquiries around town didn't yield any results. Knowing the Mansion is their last hope for clues, the group enters the abandoned building and return to the transporter in the basement.

Pence attempts to access the transporter, but finds the program blocked. Ienzo then calls Sora on the Gummiphone and explains that while attempting to decipher Ansem's code, he received an alert that someone was trying to access the terminal in Twilight Town. With Pence's assistance, Ienzo is able to set up a network between the two worlds. Intrigued by the concept of a digital world within Ansem's computer, Ienzo explains that with Pence's help, he may be able to retrieve Roxas' data from the computer.

Before hanging up, Ienzo reveals to Sora that Even, the former Organization XIII member known as Vexen, has disappeared and Sora should be careful. Hayner and Olette leave, hurrying back to town for work commitments, and Sora, Donald, and Goofy head back outside.

Fade in on Sora, Donald, and Goofy coming to a stop at the end of a dirt path. The camera pans up to reveal Twilight Town's Old Mansion before them. The trio look up at the building in silence. Sora groans and looks side to side, his gaze eventually falling on the window of the White Room. Sora stares intently at the window's curtains, which are slowly blowing in the breeze. His eyes widen and he softly sighs. Over a panning up shot of Sora from the side, the screen fades to white with a bright flashing sound. Roxas briefly fades onto screen, in the same place and pose as Sora, but then the screen fades to white with another flashing sound, then fades back in on Sora. Cut to a close-up on Sora's eye, then the flashing sound is heard again and the camera quickly zooms out as Sora loudly gasps. Briskly shaking his head, Sora looks to Donald and Goofy, but they show no reaction, so he lowers his head, sadly sighs, then looks back up at the mansion.

Sora: "Whaddaya think, guys? This place is even creepier than I remember."

Goofy: "Well, they do say that this mansion is haunted."

Donald groans and trembles, fear obvious on his face. Sora groans and the trio look up at the mansion. Cut to a view from behind Sora, slowly zooming in on his back. An arm slithers onto screen and places its hand on Sora's back.

Cut to the sudden terror on Sora's face. As he, Donald, and Goofy scream, the camera quickly zooms out, revealing Hayner, Pence, and Olette standing behind them. Sora, realizing the hand he knocked away was Hayner's, sighs.

Sora: "Thanks for the heart attack!"

Olette and Hayner are fondly smirking.

Sora exclaims. Behind him, Donald jumps up and shakes his fist indignantly.

Donald Duck: "Not a chance!"

Olette smiles and waves an apologetic hand, but Donald retains his angry scowl.

Pence: "Nope, 'fraid not. The asking around thing was a total bust."

Hayner: "Yup. This old mansion is our last hope."

The group looks up at the mansion.

Fade in on Sora, Hayner, and Pence entering the Old Mansion's Computer Room. Pence notices the room's consoles and rushes over.

Pence sits down at the consoles with a grunt. He starts tapping the keys.

The computer screen is shown, the log-in panel fading to reveal the home-screen. The screen makes a beeping noise and its brightness increases.

Pence: "Okay, I'm in. Let's get that transporter working..."

A couple text boxes pop onto the screen, but Pence grimaces a gasp as a red warning box follows with an accompanying alarm. The rest of the group has congregated around Pence, everyone taking in the blinking screens with concern. With an "Uh", Pence starts pressing more keys, but this only causes more "DATA ERROR" boxes to appear.

Sora: "Protected from what?"

Pence: "I guess from us? We can't use it to get to the other Twilight Town."

Hayner: "Why not? It worked before! We sent Sora there!"

Pence: "Well that was then, and this is now."

Olette: "And there's no other way?"

Pence hums and looks back to the computer screen.

Sora gasps as the Gummiphone ringtone begins to blare from his pocket. With a curious hum, he pulls it out and answers. A video feed of Ienzo appears.

Ienzo: "Hello, Sora. You wouldn't happen to be in front of a computer?"

Radiant Garden's Computer Room is shown, where Ienzo stands at the computer desk while talking to Sora.

Ienzo: "I was tinkering with Ansem's computer—you know, to decrypt the Code that was left in it? And I noticed that someone had logged in from another terminal. I figured it might be you."

Donald Duck: "You don't know what he said."

Sora crouches and whispers to Donald.

Back in Radiant Garden, Ienzo, who has clearly heard the exchange, laughs.

After an "A-hyuck" from Goofy, Ienzo scratches his temple.

Back in Twilight Town, Sora holds the Gummiphone up to Pence.

Pence: "Oh, hi there. This is Pence. I'm the one who logged into the computer."

Ienzo: "Good. As long as it's a user that we know we can trust."

Behind Pence, Hayner grunts and crosses his arms. After a moment, he groans loudly and bends over, scowling.

Hayner stomps forward to yell into the phone, eliciting an "Uh" from Sora and causing everyone to recoil at his sudden interruption.

Hayner: "The transporter to the other Twilight Town!"

Hayner: "It's the only way to find Roxas. You gotta help us."

Ienzo: "Another Twilight Town? And a "transporter"? Okay... A virtual town inside the computer, made of data."

Goofy: "Mm-hmm, we've seen one. That's what we used once to investigate Jiminy's journal."

Ienzo: "Maybe I can do something. Pence, let's get a network set up. My address here is... "

The screen fades to black. Fade back in on Pence typing on the computer. A soft snoring can be heard. Cut to show Sora, standing but fast asleep. The Gummiphone he is still holding starts to beep and he is shaken out of his rest. A few more beeps come from the phone.

Sora, who had already begun to slide back into sleep, starts fully awake. He lifts the phone up, excited.

Ienzo: "Now that our two computers have been successfully networked together, I can take control of the terminal there and change the privileges..."

Ienzo: "Yes. For the virtual world to be completely realized, Ansem the Wise would've included Roxas's full data in the construction. Meaning, somewhere on your machine there's a log of that data that—Uhh...basically, we can decipher Ansem's Code more quickly, and we can analyze the virtual Twilight Town while we're at it."

Ienzo: "Glad you're following along. Don't worry, we'll handle it. Chip and Dale will be helping me out here on this end. I'll call you back as soon as we know anything more."

Ienzo: "Oh, before I forget—a bit of troubling news. It's about one of the Organization's former members. You knew him as Vexen—"

The screen flashes to white, then displays an image of Vexen during his attack outside the Old Mansion.

Ienzo: "but to us he was Ansem's apprentice Even. He was recompleted like the rest of us,"

The screen flashes to white, then fades back in on the group in Twilight Town.

Ienzo: "but hadn't regained consciousness yet. Then, sometime after Lea left, Even vanished. Aeleus and Dilan—the two you knew as Lexaeus and Xaldin—they went out looking for him, but... he's just gone. And I'm starting to worry."

Sora: "You think he's on their side?"

Ienzo: "I think it's a real possibility. He's a devious researcher. You should be careful."

Sora ends the call and puts the phone away.

Hayner: "Oh no! We got work! I totally forgot."

Hayner runs for the exit.

Pence: "Really? But what about all this?"

Hayner stops running and turns back to his friends.

Hayner: "Hey, both are important. We're gonna need some cash to go to the beach. Also, don't forget the pretzels."

Pence hums confusion, then with an "Uh", starts counting on his fingers. Olette peers over his shoulder.

Pence and Olette smile at each other and chuckle fondly. Hayner waves and walks away.

Olette waves and follows after Hayner.

Pence, still at the computer, calls after his friends.

Pence: "Oh, and since I'm manning the computer here, you guys're in charge of earning my share."

Hayner: "No pretzel for Pence."

Hayner runs out of the room. Olette laughs and jogs after him.

Pence sighs and hangs his head. Sora, Donald, and Goofy laugh as the screen fades to black.