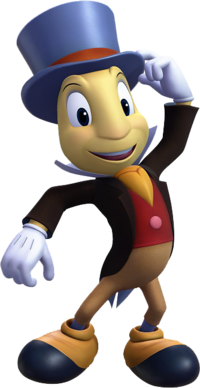 Jiminy Cricket is a cricket assigned by Queen Minnie as royal chronicler. He accompanies Donald Duck and Goofy on their journey to find King Mickey, and documents their journey in Jiminy's Journal. He originates from the 1940 Disney animated film Pinocchio.

After their adventures in Olympus, Sora, Donald, and Goofy return to The Mysterious Tower, where Master Yen Sid tells Sora to continue on his search for the power of waking with the end goal of saving Aqua. Before they leave, Jiminy Cricket appears, exclaiming that they can't take a journey without him there to chronicle it. The group follows with one final bow to Yen Sid before they all depart.[1]

Inside the Gummi Ship, Goofy and Donald are waiting for Sora to set their next path of travel when they are interrupted by a strange ringing sound. Sora searches around, but it is Jiminy who discovers the source is inside Sora's pocket. Sora pulls a device from the pocket and, confused, presses a button on the front. Dale and then Chip appear on the device's screen, revealing what Sora holds is a Gummiphone, something they created so they could keep in touch with Sora on his travels. They have called to tell Sora about some of Ansem the Wise's data that Riku discovered during their time in sleeping worlds. The conversation is joined by Ienzo, who has been examining the data Riku found, and informs Sora that they have learnt that Sora's heart doesn't completely belong to him. To the other's surprise, Sora is not shocked by the information, for he has suspected Roxas was inside his heart for some while. Intrigued, Ienzo signs off to continue his investigations, while Chip and Dale give a cheery farewell and the promise of help should the others ever need it. Sora exhibits little knack for technology, so before they sign off, Chip and Dale make sure to ask Jiminy to teach Sora how to use the Gummiphone properly, something Jiminy happily agrees to. Thinking about this new information, Sora decides the best way to know where to go is by following Roxas' heart. With encouragement from Donald, Jiminy, and Goofy, Sora summons his Keyblade and opens a gate to their next destination.[2]

The group arrive in Twilight Town and head down to the Old Mansion Computer Room where, with the help of Hayner, Pence, Olette, and Ienzo, their efforts to find Roxas are blocked by one specific program: the transporter to the virtual Twilight Town. It is Jiminy that realizes what they are trying to access is a kind of datascape, leading Goofy to reminisce on their investigations into Jiminy's Journal. [3]