The Mysterious Tower is a traveling world that changes locations frequently. It is the home and base of operations for Master Yen Sid and is often visited by those he guides.

The Mysterious Tower is a tall, yellow, stone tower with a design equal parts medieval and whimsical. From the outside, several turrets of varying size can be seen, all with turquoise pointed roofs save for the largest, highest, and most central turret, whose roof is blue and decorated with large white stars and a moon. The Mysterious Tower floats in an unknown place, surrounded by an endless night sky that teems with twinkling stars and swirling galaxies. Visitors arriving at the Tower are able to land on a small lawn bordered by shrubbery that leads to the Tower's front entrance.

The Tower features several different rooms. The most often seen of these rooms appears to serve as Yen Sid's office and is from where he addresses his visitors. This room is circular and likely at the top of the tower, as the star and moon-shaped windows cut into the wall look out onto the starry sky. Central to the room is the large wooden desk and high backed chair where Yen Sid sits. Around the room are cabinets, shelves, and magical paraphernalia such as candles and spell-books.

Sora, Donald, and Goofy are summoned to the Tower by Master Yen Sid. Yen Sid explains that to defeat Xehanort, they must awaken their allies that are trapped in slumber, but as Sora's Mark of Mastery exam ended poorly, Sora will be unable to assist in this task until he has regained the power of waking. Yen Sid encourages Sora to visit someone who once lost and later regained their powers as they may be able to help Sora in his recovery. Yen Sid tells Donald and Goofy to watch over Sora and then sends the trio on their way.[1] 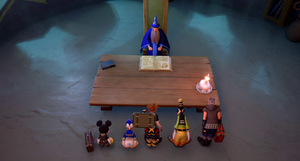 A bow to Yen Sid before the group departs.

After their adventures in Olympus, Sora, Donald, and Goofy return to the Tower. Yen Sid is disappointed to find that Sora has not learned the power of waking nor regained his strength, but seems hopeful as he remembers that Sora's greatest strength is that magic happens whenever he is in need. Their discussion is interrupted by the return of King Mickey and Riku from the Dark World, who also come bearing bad news--they weren't able to locate Aqua. All is not lost, however, as Riku recalls how Sora was lost to darkness during his exam, but Riku was able to save him. He explains that if they are able to find someone who is close with Aqua, that person might be able to travel into the abyss and find her. Mickey and Yen Sid ponder this option, but things seem grim as they realize that everyone Aqua was close with is gone. Suddenly, Sora exclaims that he will save Aqua, though when the group reacts with shock to this suggestion, Sora becomes confused and admits he is unsure why he offered. Still, the declaration was convincing, so Sora is told to continue on his search for the power of waking with the end goal of visiting the Realm of Darkness to save Aqua. While he does this, Mickey and Riku will travel elsewhere to see if they can find anyone else to help.

Before they depart, King Mickey reveals that both his and Riku's keyblades are damaged. Yen Sid suggests they rendezvous with Kairi and Lea, who are training with Merlin, and then hands over two suitcases which he explains contain darkness-shielding outfits that he would like Mickey and Riku to deliver to the trainees. Sora is frustrated not to have a new outfit too, until Yen Sid summons another suitcase, this one filled with special clothing from Flora, Fauna, and Merryweather, and a gift from Chip and Dale. Sora is ecstatic and about to go, when Jiminy Cricket appears, exclaiming that they can't take a journey without him there to chronicle it. With the old team back together, Yen Sid gives Sora a departing gift: a Heartbinder. Everyone follows with one final bow to the old Keyblade Master and then they all depart, Yen Sid wishing them well with an old saying as they go.[2]