This article is about the Keyblade Master

You may be looking for a time-displaced version from his youth. 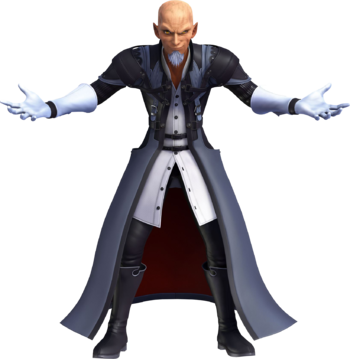 "I swore I would survive... and be there to see what awaited beyond the Keyblade War!"
Master Xehanort, Kingdom Hearts Birth by Sleep

Master Xehanort is a Keyblade master and the main antagonist of the Kingdom Hearts series. He seeks to recreate the Keyblade War so that he can recreate the world as he believes it should be.

In an unknown city, two boys are playing a board game while discussing the legend of the Keyblade War. While one, the Boy in White, considers it ridiculous that anyone would want to start a war in the first place, the other boy, the Boy in Black, wonders what those who started the war aimed to do. He notes that the future has already been set in stone because of the foresight abilities granted by the Gazing Eye, recalling a prophecy that darkness would prevail in the Keyblade War, while the Boy in White insists there is more to the light than it seems. The board game seemingly ends in a tie, with both boys' pieces unable to move forward.[1]