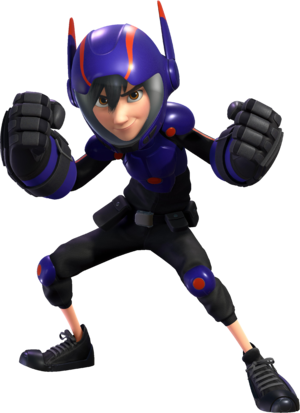 Hiro Hamada is a member of the superhero team Big Hero 6 in San Fransokyo in Kingdom Hearts III. He is from the 2014 Disney film Big Hero 6.

Hiro Hamada is a brilliant young man in the Disney film Big Hero 6. He largely wastes his talent building robots to fight. However, his brother Tadashi encourages him to use his talents to do more, and he enters a science fair where he presents his microbots. However, shortly thereafter, there is an explosion at the school, where both Tadashi and his professor, Robert Callaghan, are killed. After the explosion, Hiro takes ownership of Tadashi's healthcare robot Baymax. Sometime later, Baymax advertently leads Hiro to the scene of the explosion, where they find who they believe is behind the fire and deaths of both Tadashi and Professor Callaghan. Hiro then retools Baymax, fitting him with his iconic red and purple armor and, joined with his new friends Go Go, Wasabi, Honey Lemon, and Fred, confront the masked man who had, through the explosion, taken Hiro's microbots. On an abandoned island, they find the man, who turns out to be Professor Callaghan. Hurt and enraged by the professor's disregard for Tadashi's death, Hiro tells Baymax to kill Callaghan, removing his medical programming; however, the others are able to stop Baymax, with Callaghan escaping.

After helping Hiro overcome his anger and grief, Baymax and the rest of the team race to an event at Krei Tech, where Callaghan attempts to use the microbots to exact his revenge on Alistair Krei, whose teleporting experiment had apparently killed Callaghan's daughter, Abigail. Baymax, however, identifies life in the portal Callaghan had built, and he and Hiro hurry to rescue Abigail. They find her in her pod in hyper-sleep, and attempt to get her out, but debris from the fight damages Baymax's armor. In order to rescue Hiro and Abigail, Baymax decides to launch them using his rocket fist. Hiro refuses, but Baymax calms him down, explaining that he will always be with him. Reluctantly, Hiro gives the deactivation command, and Baymax ignites his rocket fists, safely sending Hiro and Abigail out of the portal just as it explodes, trapping Baymax behind.

Hiro was first revealed to be in Kingdom Hearts III in a short trailer shown at Sony's PlayStation Lineup Tour in September 2018.[1]