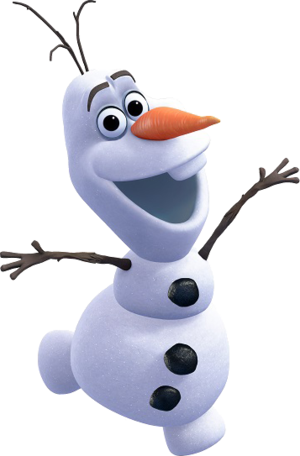 Olaf is a snowman created by Elsa, and a character introduced in Kingdom Hearts III. He originates from the 2013 Disney computer-animated film Frozen.

Olaf is a living snowman, made up of three balls of snow, with the top snowball noticably taller and more eliptical, and two smaller snowballs for his feet. He has three lumps of coal as buttons, two sticks for hands, and a carrot for a nose. He also has a bucktooth.

Olaf is a living snowman created by Queen Elsa in the highly-popular 2013 animated Disney film Frozen.

In the film, Olaf is created by Elsa after she runs away from Arendelle and tries to live in isolation. Unbeknownst to her, the snowman comes to life and begins to roam the mountain until he runs into Anna, Kristoff, and Sven. After explaining a curiously contradictory affection for summer, Olaf chooses to join Anna and the others to find Elsa and have her break her curse of eternal winter. When they arrive, Olaf runs in and introduces himself to Elsa, to her surprise. However, Elsa soon throws them all out and sends a giant snow monster to scare them away, which Olaf unsuccesfully tries to distract. Later, once they escape, Olaf joins the others in taking Anna to Kirstoff's troll family, and later to Arendelle to find Hans and break Anna's curse. Arriving within the kingdom, Olaf gets separated from the rest, and ends up staying in Arendelle after Kristoff leaves Anna at the castle. Olaf finds Anna locked in a room, where Prince Hans, whom they assumed would break Anna's curse, had left her to die so he could become King of Arendelle. Olaf tries to light a fire, before revealing to Anna Kristoff's apparent feelings for her. He helps her escape from the encroaching icicles in the castle to meet up with Hans, who he notices is racing back to Arendelle as the winter worsens. Once outside, a blizzard hits, and Olaf is taken away with the wind before Anna can find Kristoff. After Elsa learns to control her powers and ends the eternal winter she had placed on Arendelle, Olaf reappears, and Elsa grants him a personal flurry of snow to help him avoid melting away in the heat.