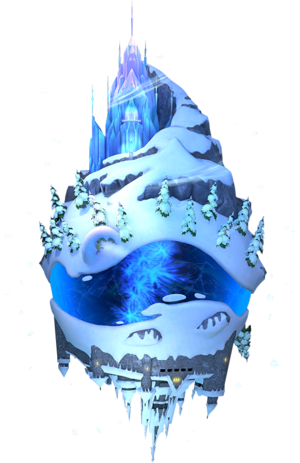 Arendelle is a world that appears in Kingdom Hearts III. It is based on the 2013 computer-animated Disney film Frozen.

The Labyrinth of Ice[edit | edit source]

Sora, Donald, and Goofy arrive in Arendelle and see a young woman run across a quickly freezing sea. Noticing that she seems sad, Sora decides they should follow her. They catch up to the young woman, who introduces herself as Queen Elsa of Arendelle. Sora and the others begin to ask her why she's alone on the snowy mountain, and their discussion irritates Elsa until she accidentally attacks them with her ice powers. After fighting off the Heartless, which then appear, Elsa explains that everyone in Arendelle would be safer with her gone, and she runs away, creating a giant block of ice to stop Sora and the others from following. Before they can attempt to do so, Larxene, a member of the Real Organization XIII, tells Sora and the others to back off, and manipulates the ice block to instead trap them within a labyrinth of ice.

When Sora and company finally make it out of the labyrinth, they begin to climb the mountain in search of Elsa, concerned for her safety amidst the appearance of the Organization. They arrive to see Elsa build an ice castle at the top. However, Larceny appears again before they're able to approach the castle, and claims to be following Elsa because she may be one of the new lights needed to start the Keyblade War, and she wants to know whether her powers are of light or darkness. She then summons a gust of wind to blow Sora, Donald, and Goofy off the mountain.

When they come to, they once again attempt to climb the mountain to reach Elsa, and run into her sister Anna, an ice harvester named Kristoff, his reindeer Sven, and a live snowman named Olaf. Anna explains that she had made Elsa angry during her coronation ceremony the night before, and so caused her to cast an eternal winter.

Together, they climb up the mountain, but are soon separated when the Heartless appear. Sora, Donald, and Goofy arrive ar the ice castle sometime after Anna, Kristoff, and Olaf do, but are soon chased out by Marshmallow, a giant ice monster that Elsa summons when she, in frustration, tells Anna she can't undo the winter. Although Sora and company defeat the monster, the monster causes them to fall off a cliff, landing in the snow below, again.

They soon try once more to make their way up the mountain. And see a man carrying Elsa down the mountain. Donald senses darkness emanating from the man, and they decide to follow him, fearing for Elsa's safety. The trio then runs into the snow giant again, and they join up to try and save Elsa. They then catch up to Kristoff, who is fighting with Sven. He explains that Anna's heart had been struck by ice, and that they took her to her true love in Arendelle. Sora, Donald, and Goofy are confused, having believed the whole time that Kristoff and Anna were together. When a storm begins to formulate above Arendelle Castle, Kristoff quickly races on Sven back to the castle. Sora, Donald, and Goofy, aided by Marshmallow, make their way down the mountain to the kingdom, where they arrive just as Anna is frozen entirely, sacrificing her potential rescue by Kristoff to stop Hans, the mysterious man Sora had seen carrying Elsa, from killing Elsa. This causes Hans to fall back, his sword shattering on contact with Anna's frozen being. Knocked out, the darkness within Hans breeds the powerful Sköll Heartless, which Sora, Donald, and Goofy, with the help of Marshmallow, are able to defeat. The ensuing explosion of darkness, however, consumes Marshmallow.

After defeating Sköll, Sora, Donald, and Goofy see Elsa crying over the completely frozen body of her sister Anna. However, Anna begins to thaw because her decision to save her sister from Hans constituted an act of true love for her. Excited for Anna's return, Sora and company run to the group, but are suddenly stopped by Larxene, who reveals that both Anna and Elsa are part of the New Seven Hearts the Real Organization XIII needs in case Sora fails to gather the Guardians of Light, before revealing that the Organization has all thirteen Seekers of Darkness. Although excited for Elsa and Anna's reunion, and Elsa's subsequent realization that love is the key to controlling her powers, Sora is concerned for them should the rest of the Guardians of Light not be found.

The world was first revealed at a trailer for Kingdom Hearts III at E3 2018.