KINGDOM OF CORONA
Kingdom of Corona 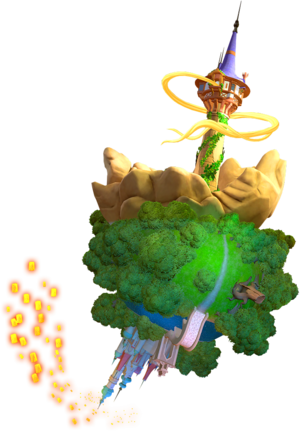 Kingdom of Corona is a world that appears in Kingdom Hearts III. It is based on the 2010 Disney film Tangled.

Rapunzel grows up her whole life under the watchful care of Mother Gothel[1], who tries to keep her in her tower in order to keep benefitting from the healing power of Rapunzel's hair.[2]

Sora, Donald, and Goofy arrive and run into Flynn Rider, who is running away from the Heartless.[3] He escapes into a hidden tower, where he soon finds himself trapped by a young girl named Rapunzel. She promises to return to him his satchel, where he has hidden a crown he had stolen, only after he takes her to see the lanterns the following night.[4] Meanwhile, Sora and company defeat the Heartless and begin to look for Flynn. They find the hidden passage to the tower, and as they approach, find Flynn and Rapunzel coming down from the tower.[5][6]

They join Flynn, who introduces them as his sidekicks, and together journey through the forest the kingdom. As they do so, Rapunzel marvels at the world around her, exploring everything from rabbits to the cold water of a small lake.

Meanwhile, Mother Gothel has returned to the tower and found that Rapunzel is missing. She finds the satchel with the stolen crown and Flynn's wanted poster. Then, Marluxia appears and promises to help her recover Rapunzel.

Sora and company soon face several Nobodies, and Rapunzel and Flynn run ahead. After fighting off the Nobodies, Marluxia appears and warns Sora to protect Rapunzel, who is one of the nee Seven Hearts. Shortly afterwards, while trying to catch up to Rapunzel and Flynn, they run into Mother Gothel, who soon dismisses them when they explain that they've lost track of Rapunzel. As Gothel leaves, Sora wonders if Marluxia is onto something. They begin to look for Rapunzel and Flynn through the night, and find them with a horse named Maximus. They then proceed to make the rest of the journey to the kingdom just in time for the festival. There, Rapunzel invites Sora, Flynn, and the others to dance in the celebration in the plaza.

Once evening falls, Flynn takes Rapunzel on a boat to watch the lanterns fill the night sky. While waiting for the lanterns to show, Rapunzel begins to wonder about her dream to see the lanterns, and what she will do next. Flynn ensures her dream will be everything she's wanted, and encourages her to now find a new dream as the lanterns begin to float above the kingdom. Rapunzel then returns to him the satchel with the crown, and Flynn decides to go ashore to take care of it. While there, however, Flynn somehow is knocked out and tied to a boat that floats away, the crown tied to his hand. Marluxia then appears to Rapunzel, and tells her that Flynn isn't meant to be with her before surrounding her with a pair of Nobodies. Rapunzel runs away and gets her hair stuck on a log before hearing Mother Gothel behind her. She turns around to find that Gothel has defeated the Nobodies, and dejectedly returns to her tower with Gothel.

Sora, Donald, and Goofy arrive on the shore to see Rapunzel walking away with Gothel, and Sora attempts to call out to Rapunzel, but he's interrupted when Marluxia suddenly appears. Marluxia explains that Gothel is protecting Rapunzel from whatever dangers exist in the world, and revealing that Rapunzel is one of the New Seven Hearts, maidens that inherited the light of the princesses of heart. Before Sora, Donald, and Goofy are able to fight Marluxia, however, Marluxia casts Sora into a sleep.

Rapunzel and Gothel have return to the tower, where Rapunzel realizes that she is the lost princess the kingdom had been searching for, and that Gothel was hiding her the whole time. However, Gothel imprisons her before she is able to leave the tower. Meanwhile, Flynn escapes custody, having been set to be hanged for his crimes, and reunites with Donald and Goofy, who had been unable to wake Sora. However, Flynn has Maximus wake him by licking him. They join Flynn and Maximus on their way back to Rapunzel's tower. They are soon stopped by several Nobodies, and Sora, Donald, and Goofy decide to stay behind and deal with them, allowing Flynn to hurry to the tower. Once Flynn arrives at the tower, however, he finds Rapunzel chained to the ground. Gothel sneaks up from behind, meanwhile, and stabs Flynn. Afterwards, she grabs Rapunzel's chains and begins to drag her to a chamber beneath the tower, but Rapunzel keeps fighting to get away. Rapunzel finally promises to stay with Gothel if she allows Rapunzel to save Flynn's life. As Rapunzel is about to do so, however, Flynn takes a shard of broken glass from a mirror that had broken earlier and cuts off Rapunzel's hair, destroying the power that Gothel had been benefiting from and causing her to age. Gothel, in horror, begins to stumble back, and trips over Rapunzel's now brown hair, which Pascal had pulled across Gothel's path. Sora, Donald, and Goofy, meanwhile, hurry to the tower and watch as Gothel plummets to her death. Marluxia watches from a distance and decides Gothel cannot stay near Rapunzel because she had fallen to darkness, and Gothel suddenly becomes the Grim Gaurdianess. However, Sora, Donald, and Goofy are able to defeat the Heartless. When they climb the tower, they find Flynn dying. As he does so, he tells Rapunzel that she was his new dream. Rapunzel tearfully sings the healing melody that had allowed her to heal people with her hair as a tear drops on Flynn's cheek, and this causes Flynn to be healed.

Sora, Donald, and Goofy wish Flynn and Rapunzel well, having learned themselves as well that Rapunzel was the missing princess of the kingdom, and learn that Flynn's real name is Eugene Fitzherbert.

Meanwhile, somewhere in the forest, Maleficent and Pete prepare to leave Kingdom of Corona, having had no success in finding the black box they're looking for in this world. While Pete begins to question whether the box even exists, Maleficent assures him that it does.